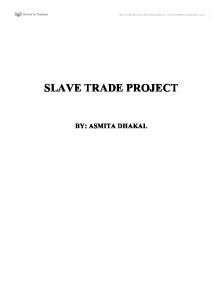 SLAVE TRADE PROJECT BY: ASMITA DHAKAL > DEFINITION The "North-Atlantic slave trade", which is also commonly known as "Transatlantic slave trade" was the international trade in slaves the world has ever known. The slaves (who were African and Caribbean people) were enslaved and supplied to North America and other parts of America for exchange of goods like cotton, rum etc. As the slaves were taken to world (countries) near Atlantic Ocean, this trade is called North-Atlantic Slave Trade. Most slaves were shipped from West Africa and Central Africa. Generally slaves were taken through coastal trading with Africans, but some were captured by European slave traders to make double benefit. Historians believe that slaves reached America but they were only half the number which was taken from Africa. Before 16th century Portuguese used to trade only deposits of gold from Africa but then they decided they could use those people for more readily need- labours. Africans couldn't be simply traded like normal people because they may escape easily, so what the Europeans thought was maybe they could be - slaves. That was more treating like animals than human beings. By the 18th century the trade was spread almost everywhere. It was a trade which was especially fruitful, since every stage of the journey could be profitable for merchants -- the infamous triangular trade. So, this trade went on and on. > WHEN, HOW AND WHY IT TOOK PLACE WHEN � Started from: 1450 - Spanish & Portuguese started slaving in Africa � Ended in: 1865 - Smuggling slaves still continued until the end of the civil war (although it was declared illegal from 1808) HOW � A. Millions of Africans were captured, sold, and/ or traded for European goods � B. They were transported across the Atlantic Ocean on slave ships that came from Portugal, Spain, England, etc. to North America and others parts of America. ...read more.

Before 16th century (when the slave trade hadn't started) Bristol used to trade goods like woollen cloth, coal, lead, and animal hides with France, Spain, Ireland, Portugal, and some parts of North Africa. Bristol's trading with the Caribbean and North America began to succeed. The Royal African Company which had control over all trade between countries in Britain and Africa had started trading slaves. As slaves were highest demand at that time and seeing that they would make double profit Bristol wanted to join African Slave Company. But after few time Bristol started trading slaves independently. They traded their first slave ship "The Beginning" (full of African slaves) to the Caribbean. They profited a lot as well. By 1807, 2,108 slave ships left Bristol to make the trip across the Atlantic with slaves. Bristol now was major slave trade city. All the slave ships passed the dock of Bristol Harbour. Not to forget "Bristol was one of the three points of the Triangular Slave Trade". > WHAT WAS IT Literally, Triangular trade is a term indicating trade among three places. This trade either exports the things or imports the things. Historically, this was the name given to the trading route used by European merchants who exchanged goods with Africans for slaves, shipped the slaves to the Americas, sold them and brought goods from the Americas back to Europe. Merchants who traded in this way could get very rich indeed as American goods fetched a high price in Europe. It was called the triangular trade because of the triangular shape that the three legs of the journey made. The first leg was "The outward Passage", journey from Europe to Africa where goods were exchanged for slaves. The second, or middle, leg was "The Middle Passage", the journey of the transportation of slaves to the Americas. The third and final leg was "The Return Passage", the journey of transport of goods from the Americas back to Europe. ...read more.

He was a main leader to fight for civil rights. But he was also murdered. However, the battle was eventually won. In 1964, President Lyndon Johnson signed the Civil Rights Act. This Act made it illegal for any Americans to be discriminated against their race, color or skin. PICTURE GALLERY Now we have come to the end of this research project about "North-Atlantic Slave Trade". I have put lots of information about slave trade. And most important thing is that now I have learnt much more about what slave trade was and how it went on. Slave trade was not only practised in Europe or America but there was also Asian and Arab countries related to this trade. It was called - Arab slave trade. The slaves were taken also to those countries like they were taken to America, Brazil etc. so, we can clearly notice that slave trade was such huge and popular but infamous trade. It is actually a hard deal to abolish the things that are practised by whole world. But still after the fight for humanity and civil war, equality was finally signed by all countries and people. Main people who contributed for this revolutionary change are - Abraham Lincoln, the 16th president of United States. And the other people are - William Lloyd Garrison, John Greenleaf Whittier, Harriet Beecher Stowe, Frederick Douglass, Charles Henry Langston, and John Mercer Langston. They were all the abolition reformers who believed in equality. We all also must choose for equality and justice. I have referred to many websites and also borrowed some books about slavery from libraries. Some of the links are mentioned below - * http://en.wikipedia.org/wiki/Atlantic_slave_trade * http://bristolandslavery.4t.com/ * http://encarta.msn.com/encyclopedia_761595721/atlantic_slave_trade.html * http://africanhistory.about.com/od/slavery/ * http://en.wikipedia.org/wiki/Triangular_trade Some of the books I referred are the following: * " Bristol and transatlantic slavery": edited by Madge Dresser and Sue Giles * "Slavery obscured", written by Madge dresser I have also referred to many other sources to get the required information about slave trade. These all sites have helped me a lot to write what exactly is required. Thank - you! ?? ?? ?? ?? ...read more.