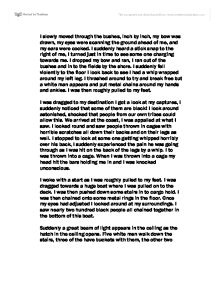 Slave trade story. I thrashed around to try and break free but a white man appears and put metal chains around my hands and ankles. I was then roughly pulled to my feet.

I slowly moved through the bushes, inch by inch, my bow was drawn, my eyes were scanning the ground ahead of me, and my ears were cocked. I suddenly heard a stick snap to the right of me, I turned just in time to see some one charging towards me. I dropped my bow and ran, I ran out of the bushes and in to the fields by the shore. I suddenly fell violently to the floor I look back to see I had a whip wrapped around my left leg. I thrashed around to try and break free but a white man appears and put metal chains around my hands and ankles. I was then roughly pulled to my feet. I was dragged to my destination I got a look at my captures, I suddenly noticed that some of them are black! ...read more.

I saw nearly two hundred black people all chained together in the bottom of this boat. Suddenly a great beam of light appears in the ceiling as the hatch in the ceiling opens. Five white men walk down the stairs, three of the have buckets with them, the other two have weapons. They start walking around slopping white gooey liquid in to people's hands I realised its food and pushed forward to get some. Two days later the men appear again but this time they don't bring food, they unlocked the chains holding me to the bottom of the boat and pushed me towards the stairs. I was then pulled up and pushed into a huddle in the middle of the boat. As I stood there a bucket of water from the sea was chucked over me. I experienced stinging pains in my back as the salt water was poured over my back. I then heard a beat arise from a drum. ...read more.

I'm confused I then see a black man. I walk up to him. He then takes me out side. He shows me to a large field. He ordered me to take big stalks of sugar to a cart. I was told to do this as soon as I could see what I was doing till I couldn't see in the night. When I was taking a stalk of sugar I tripped and fell to the ground. I noticed the head of an axe. I pick it up and put it into my pocket. When my work is done I use the axe head to saw the chains off. It takes me weeks but I managed to saw it in half. I quickly collected all my belongings. I ran through the woods and reach the other side just before sun rise. I realise they now know I had ran away. I kept running till I reached Haiti and I realised I was free. That was the story of how I was captured and turned into a slave by Adam Beagle ...read more.