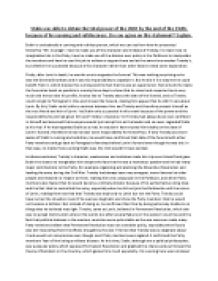 Stalin was able to obtain total power in the USSR by the end of the 1920s because of his cunning and ruthlessness. Do you agree?

﻿Stalin was able to obtain the total power of the USSR by the end of the 1920s because of his cunning and ruthlessness. Do you agree on this statement? Explain. Stalin is undoubtedly a cunning and ruthless person, which we can see from how he presented himself as ?Mr. Average?, how he made use of the character and mistake of Trotsky, his main rival, to marginalize him in the Party, how he made use of the division over policy in the Politburo to manipulate the members and how he used his job to achieve a support base and at the same time weaken Trotsky?s, but whether he succeeded because of his character rather than other factors needs some exploration. Firstly, after Lenin?s death, he was the one to organize the funeral. This was nothing surprising as he was the General Secretary and it was his responsibility to organize it. But he did it in a way the he could benefit from it, which showed his cunning and the fact that he was an opportunist. Not only did he make the funeral as lavish as possible in merely three days to show that he cared and respected Lenin very much and hence raise his profile, he also lied to Trotsky about the date of the funeral, and so Trotsky could not get to Petrograd in time and missed the funeral, making him appear that he didn?t care about Lenin. By this, Stalin could strike a contrast between him and Trotsky and therefore present himself as the true friend and heir of Lenin. ...read more.

No sensible politician would resign from his most important post in a situation like that, because it was apparently exactly what his opponent wanted him to do. Although Stalin was incredibly cunning to think of this strategy, but Trotsky should have realised that it was his trick and therefore should not have resigned. This also proved that Lenin?s comment about Stalin was correct. In his Testament, he said that Stalin was likely to misuse his power and should be gotten rid of immediately. In the end, Stalin did abuse his power from his job for his own benefits. Yet, even though Lenin was like a God to the Party members, Stalin managed to survive his Testament because of the support of Kamenev and Zinoviev. They persuaded the Party members that Lenin?s comment about Stalin was groundless, that they worked with him in perfect harmony during the period when Lenin was very ill. They only supported Stalin because, firstly, it was the only chance for them to continue ruling the party, as they did in the triumvirate. They also knew that if Trotsky got power, he would be even more dogmatic than Lenin, and they wouldn?t even have a chance to speak, as Trotsky never listened or showed respect to anyone but Lenin in the meetings. When other members talked, he would either read a book or sleep, showing absolutely no respect for them. Moreover, they thought that even if Stalin got power, he was more likely to be a leader that would listen to other people and work together. Therefore not only did they save Stalin out of the mud, they also stopped the Testament from being published, so as not to further embarrass Stalin, so the majority of Russian people did not know what Lenin really think of Stalin. ...read more.

In my opinion, the most important reason was the mistakes made by Trotsky himself because of his character. It was Trotsky losing it rather than Stalin winning it. It is because firstly, in terms of personal charm and intellectuality, Stalin was nowhere as outstanding as Trotsky. He was a poor speaker, he did not have clear views or directions and he did not have any major contributions to the Party. On the other hand, Trotsky was totally opposite of him. He was a charming leader, intellectual and an excellent orator. No matter how cunning Stalin was, if Trotsky was less arrogant, respected other people and was less dogmatic on issues that he believed were right, he would still be far more popular than Stalin as he was so intellectual and had made so many contributions to the Party, as people usually follow classic leaders unless their strong character twisted into threat, then people would turn to mediocre leaders who provide more sense of safety and are believed to be easier to work with. Secondly, although Stalin was very cunning and tricked Trotsky several times, an intelligent man like Trotsky should not have fallen into the traps if he was more alert and did not assume that everyone would just accept him as the leader. Had he regarded Stalin as his rival, he would at least be more careful on everything he does and act less rashly, for example thinking twice before resigning from the post of Commissar of War. He would also probably have done something to secure his popularity, for example building his support base in the Central Committee and trying to side with Kamenev and Zinoviev, who he shared the same political view to prevent himself being marginalised. In that case, Stalin?s cunning and ruthlessness would not have worked. ...read more.