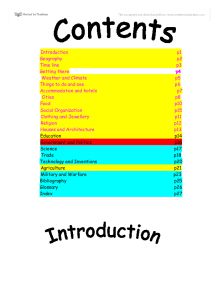 Introduction p1 Geography p2 Time line p3 Getting there p4 Weather and Climate p5 Things to do and see p6 Accommodation and hotels p7 Cities p8 Food p10 Social Organization p15 Clothing and Jewellery p11 Religion p12 Houses and Architecture p13 Education p14 Government and Politics p16 Science p17 Trade p18 Technology and Inventions p20 Agriculture p21 Military and Warfare p23 Bibliography p25 Glossary p26 Index p27 This is a guide book about the civilization of Ancient Sumer. It will give a detailed description of the best things do, see and visit while on a holiday there. It will also give a few facts about the civilization's currency, climate, religion and things like that. Sumer is an ideal place to have a perfect holiday and, planning your ancient holiday is made simple by using this guide book. It is quite simple to reach Sumer. All you have to do is take an E.C.E. euro star time traveller from Leiden Central Station. Fares vary from 100-150 euros depending on the year you decide to travel to. The E.C.E. euro star will only take you back in time to 5000BC, to go back further in time a Super Time Traveller 1000 would be better. The average time taken to reach Sumer seven thousand years ago (5000BC) is twenty minutes and for every thousand years after that, three minutes should be subtracted from the time taken to get to 5000BC. Delays are irregular and therefore make the journey a lot less stressful and there is no need to book. An E.C.E. euro star leaves every thirty minutes and passengers can choose from first or second class. Obviously, first class is more expensive and will be an additional 50 euros. Five E.C.E. euro stars a day leave each of Sumer's main cities to return you back to the present day. Modern day equipment such as I-pods, phones, computers, guns, bombs, drugs etcetera are not permitted on board any E.C.E. ...read more.

The king participated in the symbolic marriage with the goddess. This ritual Sumerians believed would make New Year fruitful and prosperous. They had many poems and hymns that the sang and read, here is one they sang to Inanna: My father gave me the heavens, gave me the earth, I am Inanna! Kingship he gave me, Queenship he gave me, Waging of battle he gave me, the attack he gave me, The flood storm he gave me, the hurricane he gave me, The heavens he a sent as a crown on my head, The earth he set as sandals on my feet, a holy robe he wrapped around my body, a holy sceptre he placed in my hand. The gods are sparrows -- I am a falcon; the Anunnaki trundle along -- I am a splendid wild cow; I am father Enlil's splendid wild cow, his splendid wild cow leading the way! Sumerian architecture is probably the oldest serious architecture (it wasn't just building houses and barns) in the world. People living in the area between the Tigris and the Euphrates rivers (modern Iraq) began to build really big buildings about 3500 BC. Because there was practically no building stone in this area, but lots of clay, Sumerian architects built their buildings out of mud-brick or fired brick. It was so long ago that the architects didn't know how to make a big building stay up if it was hollow inside, so they first built big buildings that were solid - like a sand-castle. This meant that they weren't very useful buildings and they were more like artificial hills. This is the same as the Egyptian pyramids, which were built just a little later and were also pretty much solid inside. They mostly built huge staircases of mud-brick which are called ziggurats. Each little city-state would build its own ziggurat, partly to please the gods and partly to show how powerful the town was. ...read more.

Researchers believe the notes constituted the same scale as Queen Shub-Ad's harp and were achieved by the tension of the strings rather than the length. The Sumerians were skilled farmers just like most other well developed civilizations. The most common job in Sumer was probably farming. Nearly every family in Sumer has their own piece of land to grow crops and raise farm animals. The most common crops that they grow are barley, chickpeas, lentils, millet, wheat, turnips, onions, garlic, lettuce, sesame, leeks and mustard. The most common fruits that are grown in Sumer are apples, plums, grapes and dates. They use oxen to carry heavy loads and donkeys as their main source of transport. As they keep farm animals as their main meat source they only had to hunt fish and wild fowl (the latter being mainly for fun). The Sumerians also gather berries and fruit. They use baskets to carry the fruit and the berries. These baskets were made from the reeds that grow on the banks of the Euphrates and Tigris rivers. Many animals are not killed in the hunt but are used as farm animals for their meat or usefulness on a working farm. Sheep are useful for the people who make clothes because their wool. One of the greatest contributions to later civilisations was a controlled military. Soldiers would carry a pointed spear to drive away their enemies. Later development led to a wheeled war chariot in which one man would control the mule-driven chariot and another soldier would cast spears at the enemy. The mounted soldiers were surrounded by foot soldiers who attempted to protect them. [Obviously, military tactics also developed at this time.] The soldiers would be ruthless and would slaughter their enemies for opposing them. Books The Atlas of Ancient Worlds by Dr. Anne Millard Prentice Hall World Explore, The Ancient World by A message of ancient days by Early Civilizations by The Times Atlas of Past Worlds edited by Chris Scarre Websites www.crystallinks.com www.historyforkids.org www.kathimitchell.com www.bible-history.com www.shrewbury-ma.gov www.home.cfl.rr.com www.fsmitha.com/h1/ch01.htm 8 ...read more.