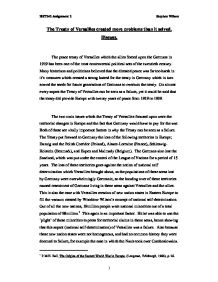 The Treaty of Versailles created more problems than it solved. Discuss.

The Treaty of Versailles created more problems than it solved. Discuss. The peace treaty of Versailles which the allies forced upon the Germans in 1919 has been one of the most controversial political acts of the twentieth century. Many historians and politicians believed that the dictated peace was far too harsh in it's measures which created a strong hatred for the treaty in Germany which in turn sowed the seeds for future generations of Germans to overturn the treaty. On almost every aspect the Treaty of Versailles can be seen as a failure, yet it could be said that the treaty did provide Europe with twenty years of peace from 1919 to 1939. The two main issues which the Treaty of Versailles focused upon were the territorial changes in Europe and the fact that Germany would have to pay for the war. Both of these are vitally important factors in why the Treaty can be seen as a failure. The Treaty put forward to Germany the loss of the following territories in Europe; Danzig and the Polish Corridor (Poland), Alsace-Lorraine (France), Schleswig-Holstein (Denmark), and Eupen and Malmady (Belgium). The Germans also lost the Saarland, which was put under the control of the League of Nations for a period of 15 years. The loss of these territories goes against the notion of national self determination which Versailles brought about, as the populations of these areas lost by Germany were overwhelmingly Germanic, so the handing over of these territories caused resentment of Germans living in these areas against Versailles and the allies. ...read more.

The inability of the German government being able to pay for the reparations is tied in with the loss of territories which Versailles took from them. Versailles took away all of the Germans overseas colonies and any assets which they had there. Also the territories that they lost in Europe were also key to the German economy. Keynes states that the Saarland accounted for 60,800,000 tonnes of German coal production in 1913, this was approximately half of all German coal produced in that year.4 With half of the German coal industry in the hands of the French, German industry in general would suffer; hence Germany would be unable to pay off the reparations. It seems simple but people, especially the French, wanted the Germans to suffer for starting the war. The leads on to the infamous article 231, the guilt clause. Whilst the guilt clause didn't create any specific problems, the fact that in the eyes of the world the Germans were perceived as the chief perpetrators of the war rankled the Germans. It also provided for the continuance popularity of anti-French and anti-British feeling, as well as nationalist sentiment in Germany. This is important as it provides a sound springboard for the growth of Hitler and the Nazis throughout the 1920s. The evidence that the concept of reparations under Versailles was more of a problem than a solution is in the fact that reparations were originally put back with the Dawes plan (1924) ...read more.

In principle the idea of the League of Nations, as set out by Woodrow Wilson, was seen as an untried but potentially viable method of conducting diplomatic relations. In practice it was far from it. From it's inception it was doomed to failure through the non-acceptance of the United States to be a part of the League. Without the Americans the organisation was little more than a front for British and French actions. The League was nothing but a diplomatic organisation with no real power; members came and went with alarming regularity. The League's ineffectiveness can be shown over the inactivities over the Japanese invasion of Manchuria, and the Italian attack on Abyssinia. The League offered no assistance to the invaded countries, just issuing strongly worded statements (Manchuria) or imposing ineffective economic sanctions (Italy). The League of Nations was just a dithering organisation, whilst it didn't create any problems specifically, it couldn't tackle them whatsoever. In conclusion it is a fair analysis to state that the Versailles peace treaty did create more problems than it solved. It was undoubtedly a flawed treaty, the task the peace makers did have was incredibly enormous. However that does not excuse the fact that they produced a treaty that was full of the biases, prejudices and vagueries of the nations involved. The Treaty was too harsh upon the Germans, it caused too much resentment amongst them, which Hitler skilfully brought to the surface. Indeed the greatest problem the Treaty of Versailles can said to have created is the Second World War. ...read more.