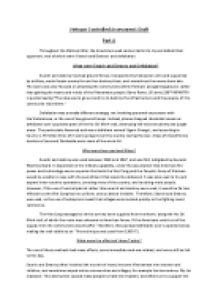 Throughout the Vietnam War, the Americans used various tactics to try and defeat their opponent, two of which were Search and Destroy and defoliation.

﻿Vietnam Controlled Assessment; Draft Part A Throughout the Vietnam War, the Americans used various tactics to try and defeat their opponent, two of which were ?Search and Destroy? and defoliation. What were Search and Destroy and Defoliation? Search and destroy involved ground forces, transported by helicopter units and supported by artillery, would locate enemy forces then destroy them, and sometimes the enemy base also. The tactic was very focused on attacking the communists within Vietnam and gaining ground, rather than gaining the hearts and minds of the Vietnamese people. Barry Romo, US army 196th INFANTRY is quoted saying ?The idea was to go out and try to destroy the infrastructure and the people, of the communist movement.? Defoliation was a totally different strategy, not involving personal encounters with the Vietnamese, or the use of any ground troops. Instead, planes dropped chemicals known as defoliants over suspected parts of the Ho Chi Minh trail, destroying the thick shrubbery and jungle areas. The particularly favoured acid was a defoliant named ?Agent Orange?, and according to Source 1, 77million litres of it were sprayed over the country during the war. ...read more.

If the Americans could cut of the supply, then the communists would suffer. Therefore, they sprayed defoliants over suspected areas, making the trail visible by air. This technique was used from 1965-71. What were the effects of these Tactics? The use of these methods had many effects, some immediate and war related, and some still be felt to this day. Search and Destroy often involved the murder of many innocent Vietnamese men women and children, and sometimes wiped entire communities and villages, for example the horrendous My Lai massacre. This destruction caused many people to hate the invaders, and often turn to support the Viet Cong . Therefore Americans lost what, in hind sight, was the most important thing they needed to win the war, the hearts and minds of the people. Defoliation had more physical, and often, more devastating effects. In Vietnam, agriculture is and was the main source of income and employment in the country, and vast growth of crops was relied upon to keep the economy stable. ...read more.

Search and Destroy can also be argued to have achieved military objectives, as it massively increased the pedantic body count of Vietnamese that the US used to measure the success of their presence. An increase in deaths meant that there were fewer communists to take control, and it also served as a deterrent to the Vietnamese people that may be tempted to support the Viet Cong. However, it can be argued that these tactics did not help achieve objectives at all. As previously mentioned, the destructive nature of the techniques lost the precious hearts and minds of the countries regular people, and that was arguably the only thing that would stop the spread of communism into the south. Furthermore, they did not stop the Viet Cong, as the communists simply adapted. This was especially apparent during the use of search and destroy, as the Cong learnt to ambush patrols once they were on the ground. Therefore, in my opinion the tactics actually had a negative effect, when it comes to looking at their contribution to achieving military objectives. ...read more.