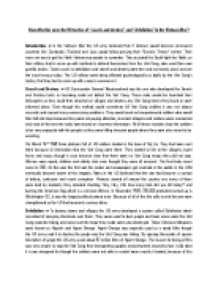 How effective were the US tactics of search and destroy and defoliation in the Vietnam War?

﻿How effective were the US tactics of ?search and destroy? and ?defoliation? in the Vietnam War? Introduction -> In the Vietnam War the US army believed that if Vietnam would become communist countries like Cambodia, Thailand and Laos would follow proving their ?Domino Theory? correct. Their main aim was to get the North Vietnamese people to surrender. They assisted the South fight the North, so their military had to come up with methods to defend themselves from the Viet Cong; who used their own guerilla tactics. Tactics such as defoliation and search and destroy were the most commonly used, and are the most famous today. The US military were being affected psychologically so badly by the Viet Cong?s tactics, that they had to come up with a way to overcome it. Search and Destroy -> US Commander General Westmoreland was the one who developed the Search and Destroy tactic as bombing could not defeat the Viet Cong. These raids would be launched from helicopters so they could then descend on villages and destroy any Viet Cong forces they found or were informed about. ...read more.

Because of all of this the calls to end the war were strengthened as the US had received a serious blow. Defoliation -> To destroy towns and villages the US army developed a system called Defoliation which consisted of spraying chemicals over them. They were used to burn jungle and town areas were the Viet Cong could be hiding and make sure the traps they made were also destroyed. These Chemical Weapons were known as Napalm and Agent Orange. Agent Orange was originally used as a weed killer though the US army used it to destroy the jungle was the Viet Cong was hiding. By spaying thousands of square kilometers of jungle the US army used about 82 million litres of Agent Orange. The reason for doing all this was very simple: to stop the Viet Cong from transporting supplies and personnel around by foot. It did what it is was designed for though the soldiers were not able to control were exactly it landed; because of this it was claimed that about 5 million people were victims to this method. ...read more.

Conclusion -> Even though the US military tactics were effective so that many of the Viet Cong were killed they often were given wrong information which lead to innocent civilians being killed. There methods also did not adapt to the Viet Cong?s methods as they would send out inexperienced troops who would just fall straight into their traps. In my opinion the US did what they were sent there to do though they did so by using unnecessary methods which killed too many innocent people because they did not have a specific target but just a vague guess on were the Viet Cong would be. Even though there were so many problems and mistakes South Vietnam grew stronger which eventually meant that US troops could go home. Sources Websites 1. http://www.u-s-history.com/pages/h1859.html 2. http://www.historylearningsite.co.uk/vietnam_war.htm 3. http://www.hodderplus.co.uk/modernworldhistory/pdf/Vietnam-1960-75.pdf Books 1. OCR GCSE Modern World History ? Third Edition ? Hodder Education 2. The World?s Greatest Twentieth Century Battlefields ? BBC Books ? Peter and Dan Snow 3. Revise GCSE History ? History Modern, British and World ? Letts 4. History Controlled Assessement CA5 Vietnam 1960-75 ? Edxcel GCSE Images (Image 1) ...read more.