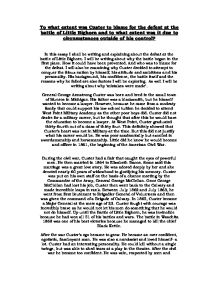 To what extent was Custer to blame for the defeat at the battle of Little Bighorn and to what extent was it due to circumstances outside of his control? In this essay I shall be writing and explaining about the defeat at the battle of Little Bighorn. I will be writing about why the battle began in the first place. How it could have been prevented. And who was to blame for the defeat. I will also be examining why Custer decided to attempt to conquer the Sioux nation by himself, his attitude and ambitions and his personality. His background, his confidence, the battle itself and the reasons why he failed are also factors I will be exploring. As well I will be writing about why 'mistakes were made'. General George Armstrong Custer was born and bred in the small town of Munroe in Michigan. His father was a blacksmith, but he himself wanted to become a lawyer. However, because he came from a modesty family that could support his law school tuition he decided to attend West Point Military Academy as the other poor boys did. Custer did not desire for a military career, but he thought that after this he would have the education to become a lawyer. At West Point, Custer graduated thirty-fourth out of a class of thirty four. This definitely showed that Custer's heart was not in Military-at the time. But this did not justify what his career would be. ...read more.

This was a very bad move he had made and he suffered consequences. He was arrested for desertion and for mistreatment of his men. Custer was stripped off his title, lost his job for a year, his income and more importantly to him, his pride and respect. Up until the Black Hills of Dakota had been the hunting grounds for the Sioux tribe. In 1862 gold was discovered in the Rocky Mountains in Montana. The Bozeman trail then opened. Because the Americans had crossed through the Sioux hunting grounds the Sioux tribe became very angry about this. For the next two years, Red Cloud and his Sioux warriors harassed travellers that came across the Bozeman trail. Due to their success, the Government negotiated with the Sioux tribe. This turned out to be the Fort Laramie Treaty of 1868. On 4th November, 1868 Red Cloud signed the Fort Laramie Peace Treaty. Red Cloud and the chiefs and the people of the Ogala, Brule and Miniconjou bands agreed to move onto the vast Great Sioux Reservation. Red Cloud agreed that his reservation should be the South of Dakota, west of Missouri River and the Black Hills. The Black Hills were special and sacred to the Sioux tribe. The U.S. also agreed to close down forts and the Bozeman trail. However, Crazy Horse, Sitting Bull and other tribe members did not agree to this. Not long after, gold was discovered in the Black Hills. The U.S. tried to buy the Black Hills from the Indians. ...read more.

And this is when the 'mistakes were made'. And Indian scout told Custer there were too many Indians to fight but as usual Custer uncared for this. When Custer prepared for attack he told Reno that he would be supported when he went to attack the village. As Custer took charge into the Sioux tribe sacred grounds, he saw how many warriors he had to fight. He was faced with 2-3000 Indian warriors and he only had around 230 men. This was going to be a very big predicament for him. When Custer had arrived there was already a battle in place so the warriors were ready for anymore attacks. The Indians were very well prepared and organised. And the Americans weren't. The Indians had repeating rifles which were given to them by the white man. The white man had 'green troops'. The men were inexperienced with weaponry and they had problems with their guns. When Custer saw his men were in danger he did nothing about it and this showed his greed and narcissism. The army had single-shot rifles which was government policy. The army also only had 6 shots a year to practise with whereas the Indians had regular practise through hunting. Also their horsemanship was excellent. There were broken lines of communication between the three officers. There was also no support given to Custer from the other two officers. Captain Benteen and Reno refused to support Custer as they had been mistreated before by him. So basically, because of Custer's attitude and selfishness it landed him in great troubles. Custer was blinded by fame and glory and would just about anything to achieve more. Written by Kuziva Foroma. ...read more.

This is a really interesting essay to look at because although the writer is clearly very knowledgeable about the period they have missed the focus of the question and this would limit the marks considerably it it were an exam answer.