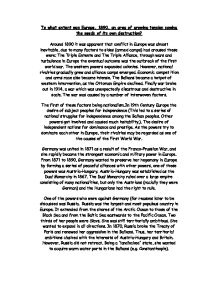 To what extent was Europe, 1890, an area of growing tension sowing the seeds of its own destruction

To what extent was Europe, 1890, an area of growing tension sowing the seeds of its own destruction? Around 1890 it was apparent that conflict in Europe was almost inevitable, due to many factors to sides (armed camps) had aroused these were; The Triple Entente and The Triple Alliance, through wars and turbulence in Europe the eventual outcome was the outbreak of the first world war. The western powers expanded colonies. However, national rivalries gradually grew and alliance camps emerged. Economic competition and arms race also became intense. The Balkans became a hotpot of western intervention, as the Ottoman Empire declined. Finally war broke out in 1914, a war which was unexpectedly disastrous and destructive in scale. The war was caused by a number of interwoven factors. The first of these factors being nationalism.In 19th Century Europe the desire of subject peoples for independence (This led to a series of national struggles for independence among the Balkan peoples. Other powers got involved and caused much instability.). The desire of independent nations for dominance and prestige. As the powers try to dominate each other in Europe, their rivalries may be regarded as one of the causes of the First World War. ...read more.

the three Emperors agreed to preserve benevolent neutrality if any one of them found himself at war with a fourth power. The League could not last long because Austria and Russia would soon rival over the Balkan Peninsula again. The triple alliance 1882, Bismarck had tactfully encouraged France to expand overseas in the hope of diverting her attention away from Alsace-Lorraine. French annexation of Tunis in northern Africa in 1881 alienated Italy, which was ambitious to build up an Italian empire in Africa. Italy was thus driven into Bismarck's camp in anger. Consequences of this was the emergence of the first alliance camp, a powerful bloc had been formed in central Europe. Germany was now guaranteed against Russia by Austria, and against France by Italy. Bismarck had successfully kept the friendship of both Russia, Austria and Italy and kept France completely isolated. He was indeed a skilful diplomat who was able to handle the European powers for Germany's advantage. Around 1890 there was a change of policy in Germany due to a change in the power this was in the form of Kaiser William the second. Bismarck was a skilful diplomat. For twenty years, he made Germany the centre of the diplomatic stage. ...read more.

The trade rivalry between Britain and Germany had also eased off in the ten years before the war because they developed their markets in different parts of the world -- Britain within her own Empire, and Germany on the continent of Europe. Thus economic rivalries played a minor part in causing the First World War. One other minor factor, which led to growing tension, was colonial rivalries. After 1870, the European nations began to acquire colonies in Asia, Africa and the Pacific. Their imperialistic activities accelerated from 1880 onwards. Colonial rivalries were a cause of the First World War for two main reasons; firstly, colonial rivalries led to strained relations among the European powers. In Africa, all the European powers except Austria and Russia had colonies there. Thus there were many clashes among France, Britain, Germany and Italy. Secondly, colonial rivalry led to indirectly to the formation and strengthening of alliances and ententes. So when all these smaller rivalries, alliances and other European matters are put together they put together a complicated yet understandable web of reasons why that in 1890 Europe was an area of growing tension, sowing the seeds of its own destruction, which in 1914 was proven with the outbreak of the First World War which had seemed inevitable for forty years previous to it! ...read more.