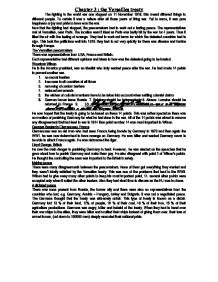 Treaty of Versailles. There was representatives from USA, France and Britain. Each representative had different opinions and ideas to how was the defeated going to be treated.

Chapter 3 : the Versailles treaty The fighting in the world war one stopped on 11 November 1918. this meant different things to different people. To certain it was a relieve after all those years of tiring war. Yet to some, it was pure happiness or joy and pride to have won the war. Now that the fighting had stopped, the peacemakers had to work out a lasting peace. The representatives met at Versailles, near Paris. The location wasn't ideal as Paris was badly hit by the war for 4 years. Thus it filled the air with the feeling of revenge. They had to work out terms for which the defeated countries had to sign. ...read more.

Alsace- Lorraine should be returned to France 9. ... 14. an international organization should be set up to settle disputes between all countries to be called the league of nations. He now hoped that the treaty is going to be based on these 14 points. This was rather special as there was no mention of punishing Germany for what he had done in the war. All of the 14 points was aimed to remove any disagreement that had lead to war in 1914 thus point number 14 was most important to Wilson. Georges Benjamin Clemenceau, France Clemenceau was an old man who had seen France being invade by Germany in 1870 and then again the WW1. ...read more.

Also they had short time to discuss as the EU was in chaos. A dictated peace There was none present from Russia, the former ally and there were also no representatives from the countries who lost, e.g. Germany, Austria - Hungary, turkey and Bulgaria. It was not a negotiated peace. The Germans thought that the treaty was extremely unfair. This type of treaty is known as a dictak. Germany lost 13 % of their land, 12% of people, 10 % of their coal, 48 % of their iron, 15 % of their agriculture productions. Germans was angry, bitter and hateful of the treaty. When they had to hand over their war ships to the allies, they were bitter and scuttled their ships instead of giving them over. their loss of armed forces, (cut down to 100000 men) deeply wounded their national pride. ...read more.