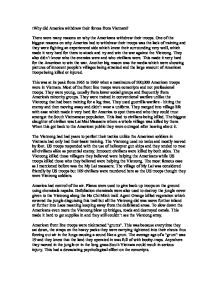 TWhy did America withdraw their forces from Vietnam?

tWhy did America withdraw their forces from Vietnam? There were many reasons on why the Americans withdrew their troops. One of the biggest reasons on why America had to withdraw their troops was the lack of training and they were fighting an experienced side which knew their surrounding very well, which made it very hard for them to attack and try and win the war against the Vietcong. They also didn't know who the enemies were and who civilians were. This made it very hard for the American to win the war. Another big reason was the media which were showing pictures of innocent people's villages being attacked and the large amount of American troops being killed or injured. This was at its peak from 1965 to 1969 when a maximum of 500,000 American troops were in Vietnam. Most of the front line troops were conscripts and not professional troops. They were young, usually from lower social groups and frequently from America's minority groups. They were trained in conventional warfare unlike the Vietcong that had been training for a log time. They used guerrilla warfare - hitting the enemy and then moving away and didn't wear a uniform. ...read more.

The average age of a "grunt" was 19 and they knew that the land they operated in was full of with booby-traps. Anywhere they moved in the jungle or in the long grass South Vietnam could result in serious injury. This had a devastating psychological effect on the conscripts. The Vietcong used mines called "bouncing bellies" - these were on springs and when tripped would spring up to about waist height and explode. They wouldn't usually kill the person but would mean the person would need immediate medical aid and 3 to 4 men to look after him. The noise of the explosion would also attract the attention of the Vietcong so they could attack. "Punji" traps were also used by the Vietcong. These were big holes in the ground with spikes in them which were covered in grass and leaves soldier couldn't see them. The tips of the spikes were usually covered in poison or dirt. "Punji" traps were also found in rivers and streams where troops had to make crossings. This made it hard for Although the Vietcong never fought in a full scale battle, in January 1968, they changed tactics with the Tet Offensive. ...read more.

Especially the casualties and the brutalising effects of the war. They didn't like the number of civilians being killed such at My Lai Massacre. They also saw the bombing of the north and the increasing use of drugs by soldiers which is why young people avoided the draft. Also because there was more broadcasting the Vietcong allowed broadcasters to move into areas where innocent people injured which were then showed to the public. This made them very unhappy. The war was also costing huge amounts of money which led to inflation and left the value of the dollar lower than it usually was. The US public by now were wondering is the South Vietnamese government worth fighting for. This also led to large protests and marches. Finally it became clear the US was finding it difficult to so in January 1968 the Vietcong launched devastating attacks in the south. In this Tet Offensive (it was called this because it took place during the Tet or lunar New Year holiday period). The Vietcong captured 75% of the main towns in the south including parts of Saigon. Eventually 750,000 South Vietnamese and 500,000 US servicemen were able to defeat the Vietcong but it took nearly two weeks to do it. After this America withdrew all their troops as they knew they were under attack by the Vietcong and the American public ...read more.