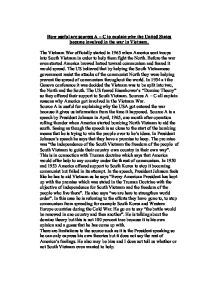 How useful are sources A - C to explain why the United States became involved in the war in Vietnam. The Vietnam War officially started in 1965 when America sent troops into South Vietnam in order to help them fight the North. Before the war even started America brewed hatred toward communism and feared it would spread. The US believed that by helping the South Vietnamese government resist the attacks of the communist North they were helping prevent the spread of communism throughout the world. In 1954 at the Geneva conference it was decided the Vietnam was to be split into two, the North and the South. The US feared Eisenhower's "Domino Theory" so they offered their support to South Vietnam. ...read more.

In 1950 and 1953 America offered support to South Korea to stop it becoming communist but failed in its attempt. In the speech, President Johnson feels like he has to aid Vietnam as he says "Every American President has kept up with the promise which was stated in the Truman Doctrine with the objective of independence for South Vietnam and the freedom of the people who live there". He also says "we are here to strengthen world order". In this case he is referring to the efforts they have gone to, to stop communism from spreading for example South Korea and Western Europe countries during the Cold War. He go on to say "the battle would be renewed in one country and then another". ...read more.

It says why he didn't want to get in involved in the War and go ahead with it. He says he felt pressure from other Politicians, "All the politicians are saying "lets move, let's get into the North". They'd bring a President down if he ran out". This quote shows how he wasn't protecting South Vietnam because he cared about their independence or freedom. He really only cares about his role as the president and his someone else taking over his role. He talks about how Vietnam isn't worth anything to him and the American people. This is the opposite of what he says in Source A and his attitude is very different to what he also says in source A. He also says "If you start running from communists, they may chase you into your own kitchen" ...read more.