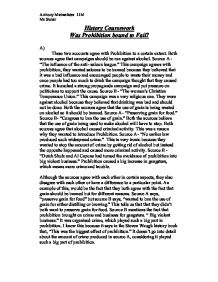 Was Prohibition bound to Fail

History Coursework Was Prohibition bound to Fail? A) These two accounts agree with Prohibition to a certain extent. Both sources agree that campaigns should be run against alcohol. Source A- "The influence of the anti- saloon league." This campaign agrees with prohibition, they wanted saloons to be banned because they believed that it was a bad influence and encouraged people to waste their money and once people had too much to drink the campaign thought that they caused crime. It launched a strong propaganda campaign and put pressure on politicians to support the cause. Source B- "The women's Christian Temperance Union." This campaign was a very religious one. They were against alcohol because they believed that drinking was bad and should not be done. Both the sources agree that the use of grain is being wasted on alcohol so it should be banned. Source A- "Preserving grain for food." Source B- "Congress to ban the use of grain." Both the sources believe that the use of grain being used to make alcohol will have to stop. Both sources agree that alcohol caused criminal activity. This was a reason why they wanted to introduce Prohibition. Source A- "No earlier law produced such widespread crime." This is very ironic because they wanted to stop the amount of crime by getting rid of alcohol but instead the opposite happened and caused more criminal activity. Source B- "Dutch Shulz and Al Capone had turned the avoidance of prohibition into big violent business." Prohibition caused a big increase in gangsters, which means more crime and trouble. ...read more.

This means that prohibition has just been introduced and he doesn't know the outcome of it or how the public will support it. In conclusion I fell that the source that is the more reliable as evidence about prohibition is source E. This is because Rockefeller has lived through the period of prohibition and knows everything that has happened. There's more information in source E about prohibition than source F. Also Kramer in source F is biased and not believable, where as Rockefeller is a good man and very reliable. D) Source G shows a table of illegal stills seized and gallons of spirits seized between 1921, 1925 and 1929. During this period of time the federal government agents were trying to enforce prohibition. By looking at the table both illegal stills seized and gallons of spirits seized the numbers increased over the years, which is showing us that prohibition was succeeding. However this is not very reliable because the numbers may have been fixed, because if the federal agents can make it look as if prohibition is succeeding they will get credit and the public may start to support the law. I also know that the numbers in the table have been boosted up because the same table is in the Steven Waugh history book, and it shows the gallons of distilled spirits seized at the period of 1925 and 1929 to be ten million under. Also from the Steven Waugh history book it says, "......take control by bribing local policemen." This means that the federal agents weren't doing their job and enforcing prohibition, so how would the numbers go up if they don't do their job. ...read more.

The drinking habits of the American people were a further reason why prohibition was bound to fail. There was a massive demand for drink which did not go away, despite the law. This is shown in Source G in the statistic showing the vast quantity of illegal spirits seized; for which there was obviously a massive demand. At the time the supporters for prohibition were campaigning for it's introduction in 1917, people in America were generally poorer. This is also shown in Sources C and D. Prohibition should have therefore enabled people to be better off financially and so be in favour of it. These sources along with source B show that it was not inevitable at the time prohibition was introduced, that it would fail. There was much evidence to show that there was public support. However, in the 1920's when Prohibition was introduced there was a booming economy and most people were in employment and were well off, and wanted to celebrate and spend their money on drink also. As a result, people forgot about the problems of drink as described in sources B, C and D. In conclusion I believe that the majority of sources do support the view that the failure of prohibition was inevitable. Those who introduced Prohibition failed to anticipate the extent of public opinion against it and also the rise in crime which people realised was much worse than drinking. Everything that they wanted to prevent by introducing Prohibition actually happened. However, it is unlikely that they would have anticipated the Police failing to act appropriately. Had the police been less corrupt then possibly prohibition could have succeeded. ?? ?? ?? ?? Anthony Michaelides 11M Ms Stoker ...read more.