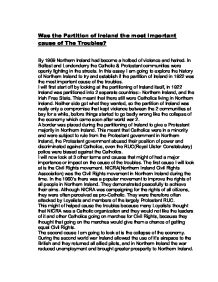 Was the Partition of Ireland the most important cause of The Troubles?

Was the Partition of Ireland the most important cause of The Troubles? By 1969 Northern Ireland had become a hotbed of violence and hatred. In Belfast and Londonderry the Catholic & Protestant communities were openly fighting in the streets. In this essay I am going to explore the history of Northern Ireland to try and establish if the partition of Ireland in 1922 was the most important cause of the troubles. I will first start off by looking at the partitioning of Ireland itself, in 1922 Ireland was partitioned into 2 separate countries:- Northern Ireland, and the Irish Free State. This meant that there still were Catholics living in Northern Ireland. Neither side got what they wanted, so the partition of Ireland was really only a compromise that kept violence between the 2 communities at bay for a while, before things started to go badly wrong like the collapse of the economy which came soon after world war 2. A border was placed during the partitioning of Ireland to give a Protestant majority in Northern Ireland. This meant that Catholics were in a minority and were subject to rule from the Protestant government in Northern Ireland, the Protestant government abused their position of power and discriminated against Catholics, even the RUC(Royal Ulster Constabulary) police were biased against the Catholics. I will now look at 3 other terms and causes that might of had a major importance or impact on the cause of the troubles. ...read more.

Northern Ireland also had some of the worst slum housing in Europe, despite of all the achievements of the Welfare State. Protests over housing in the late 1960s focused on conditions for Catholic families, although large numbers of Protestant families were also living in terrible conditions. This could of helped cause the troubles by inflicting more sectarian tension and more hatred between the 2 communities. And the third and final reason I shall be looking at is what happened when British troops were sent into Northern Ireland to try and stop the violence and what they caused. After many weeks of violence, the RUC forces finally called upon British Troops for support, and on the afternoon of 15th August 1969 the British army finally came onto the streets of Belfast. The Catholic community felt that the British Troops were their rescuers because they were an un-biased police force, they were welcomed by Catholics and given tea and sandwiches and lots of presents during the Christmas period by Catholic residents. The Protestant community did not mind the British Troops coming in, because they were loyal to the British and they thought the British Troops could finally restore law and order and maybe get rid of most of the Catholic community and let Northern Ireland become fully Protestant and Loyalist, but they did not want the British Troops to try to protect the Catholics. ...read more.

To conclude this essay I think that from all the evidence that I have gathered, I think that the Partition of Ireland was not the most important cause of the troubles because this was only one event, and although neither side got what they wanted during the Partition of Ireland, neither side lost anything to make them angry enough to use violence to achieve their aims. I think the most important cause of The Troubles was the collapse of the economy, because before the collapse of the economy the Republic of Ireland was co-operating with the British which was good as there was no hatred between IRA and British forces at the time or between Catholics and British/Protestants, and Northern Ireland had a booming industry which created lots of jobs so people were employed and working and earning money to keep themselves happy, but then the economy collapsed and people lost their jobs and were in poverty and did not have much money, so people in Northern Ireland were getting depressed and Catholics and Protestants were starting to blame each other for the collapse of the economy so sectarian tension started to rise, so they started to turn to violence to achieve their aims and that marks the beginning of The Troubles in Northern Ireland, where as if the economy did not collapse, I believe that The Troubles would have never of started because people would of been employed and earning money and generally happy, so they would have no need to use violence and start The Troubles. By Semon Bazalyeyev 10IK ...read more.