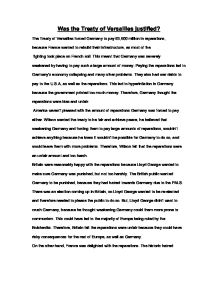 was the treaty of versailles justified?

Was the Treaty of Versailles justified? The Treaty of Versailles forced Germany to pay �6,600 million in reparations, because France wanted to rebuild their infrastructure, as most of the fighting took place on French soil. This meant that Germany was severely weakened by having to pay such a large amount of money. Paying the reparations led to Germany's economy collapsing and many other problems. They also had war debts to pay to the U.S.A, as well as the reparations. This led to hyperinflation in Germany because the government printed too much money. Therefore, Germany thought the reparations were bias and unfair. America weren't pleased with the amount of reparations Germany was forced to pay either. Wilson wanted the treaty to be fair and achieve peace, he believed that weakening Germany and forcing them to pay large amounts of reparations, wouldn't achieve anything because he knew it wouldn't be possible for Germany to do so, and would leave them with more problems. Therefore, Wilson felt that the reparations were an unfair amount and too harsh. Britain were reasonably happy with the reparations because Lloyd George wanted to make sure Germany was punished, but not too harshly. The British public wanted Germany to be punished, because they had hatred towards Germany due to the PALS. There was an election coming up in Britain, so Lloyd George wanted to be re-elected and therefore needed to please the public to do so. ...read more.

But Lloyd George thought the treaty was too harsh as Germany were excluded from the negotiations, and he didn't want to crush Germany. Therefore, he thought the treaty was unfair. On the other hand, France was also included in the negotiations. They managed to set high reparations because it weakened Germany and would rebuild the French infrastructure, have Alsace Lorraine returned because it also weakened Germany and made France a stronger nation, gain the Saarland for 15 years because it was a very good nation for industrial production, demilitarize the Rhineland and reduce the German army because the reductions would protect France from German invasion. Therefore, France thought the treaty was fair because they that felt weakening Germany would balance out the rest of Europe. On the other hand, America was also involved in the negotiations. Wilson wanted to achieve a long lasting peace, but he didn't think the treaty was aimed at doing so. However Wilson did manage to achieve: the establishment of the League of Nations from the treaty because he wanted to guarantee future peace in Europe and any conflict to be sorted by negotiation. He also achieved freedom of the seas because this meant the U.S.A could trade with more European countries easier, and self-determination for some eastern European nations because it meant countries had a say in what they did, which would keep peace in Europe. ...read more.

Germany also found it unfair that they weren't allowed to unite with the Austrian Germans. Therefore, Germany thought the territorial issues were unfair and that they hadn't been treated the same as other countries. On the other hand, Britain, America and France gained Germany's ex-colonies on mandate. France gained Alsace Lorraine and the Saarland for 15 years because the Saarland was very a useful colony for industrial production. Britain gained ex-German colonies on mandate because they would expand the British Empire further. America didn't gain any colonies for themselves but the League of Nations was set up, which was one of Wilson's objectives. The League of Nations had several of Germany's ex-colonies on mandate. Therefore, on the whole the Big Three felt that taking away 10% of Germany's land would balance out the rest of Europe, and was a fair term. I conclude that the Treaty of Versailles wasn't justified because I think it was a very biased treaty against Germany because they weren't present at the negotiations. Also, all the terms affect Germany in negative ways, whereas the majority of the decided terms affect the Big Three in positive ways. I think that because the terms were so harsh the treaty was ineffective and as a result, that was why Germany had so many problems. However, I think that the treaty was understandable because of the all damage caused during the war. But overall I think the Treaty of Versailles wasn't justified due to the reasons stated. ...read more.