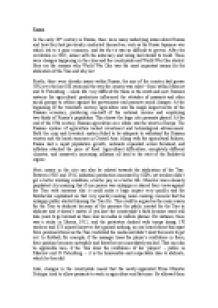 Transfer-Encoding: chunked ﻿Russia In the early 20th century in Russia, there were many underlying issues about Russia and how they had previously conducted themselves, such as the Russo Japanese war which led to a poor economy, and the fact it was so difficult to govern. After the revolution in 1905, issues with the autocracy and ruling had started to build. There were changes happening in the cities and the countryside and World War One started. Here are the reasons why World War One was the most important reason for the abdication of the Tsar and why not. Firstly, there were already issues within Russia, the size of the country had grown 50% over the last 100 years and the way the country was ruled ? from within Moscow and St Petersburg ? made life very difficult for those in the south and east. Russia's systems for agricultural production influenced the attitudes of peasants and other social groups to reform against the government and promote social changes. ...read more.

For instance, there was a strike in Siberia, 1912, and the protesters clashed with troops losing 170 workers and 373 injured however they gained nothing, no one heard about this apart from personal stories as the Tsar controlled the media and didn?t want this news to get out. In football, for example, if the manager loses the player?s confidence in them, their position becomes untenable and therefore are immediately sacked. That can also be applicable here, if the Tsar loses the confidence of his ?players? ? public in Moscow and St Petersburg ? it is the honourable and respectable idea to abdicate, which he then did. Also, changes in the countryside meant that the newly appointed Prime Minister Stolypin tried to allow peasants to work in agriculture and factories. He allowed them to purchase land from nobles and grow food from within. They borrowed money from a peasant?s bank to buy the land and those that did were labelled as Kulaks ? the idea was that the Tsar would get continued support from the peasants if he allowed them to come out of poverty. ...read more.

By 1916, Petrograd and Moscow were only receiving a third of their food and fuel requirements and there was a decrease in the amount of grain received. There was not enough food to feed the Russian people and this, therefore, led to many people showing anger towards the government as their inferiority was highlighted. This ultimately led to further strikes and the spread of anger in throughout the city of Petrograd. In my opinion I fully agree that the First World War was the main reason for the abdication of the Tsar. Yes, changes in the city and countryside had a huge impact on the state of Russia and the Tsar, however even though there are a lot of ifs and buts, had it not been for the First World War, there wouldn?t have been food shortages and a defecting army. These factors lead to social unrest and strikes against the Tsar, this made Russia impossible to govern. This led to the abdication of the Tsar. ...read more.