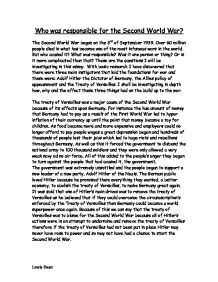 Who was responsible for the Second World War?

Who was responsible for the Second World War? The Second World War began on the 3rd of September 1939. Over 60 million people died in what has become one of the most infamous wars in the world. But who caused it? What was responsible? Was it one person or thing? Or is it more complicated than that? These are the questions I will be investigating in this essay. With basic research I have discovered that there were three main instigators that laid the foundations for war and these were: Adolf Hitler the Dictator of Germany, the Allies policy of appeasement and the Treaty of Versailles. I shall be investigating in depth how, why and the effect these three things had on the build up to the war. The treaty of Versailles was a major cause of the Second World War because of its effects upon Germany. For instance the hue amount of money that Germany had to pay as a result of the First World War led to hyper inflation of their currency up until the point that money became a toy for children. As food became more and more expensive and employers could no longer afford to pay people wages a great depression began and hundreds of thousands of people lost their jobs which led to huge riots and rebellions throughout Germany. ...read more.

The allies had several opportunities while Hitler and Germany were still weak to crush the threat, but they did not. Britain and France were too scared of sparking another world war they were not ready for and thus had too give in to Hitler on several occasions and so he became to believe that their word meant nothing and thus when they delivered their ultimatum Hitler treated it as nothing more than another false promise and thus when he invaded Poland he was not expecting war. The allies' policy of appeasement can be blamed for the Second World War because they encouraged Hitler to act aggressively and to be more warlike thus pushing Europe to the brink of war and eventually causing it to tumble; and fall into the abyss. Hitler can be described as responsible for the war as much of the build up was centered on him and Germany. For instance the remilitarization of the Rhineland was a breach of the Treaty of Versailles however England and France did nothing and this is due to the policy of appeasement that had been undertaken by the British Prime Minister Neville Chamberlain. As Britain and France did nothing this encouraged Hitler to be more aggressive and so he began to break other more serious conditions of the treaty. ...read more.

that they would split Poland between them. However some parts of Poland reused to join with Germany and so Hitler was forced to send troops in to secure the parts of Poland that did not wish to unify. Britain and France saw this as a breach as a breach of their ultimatum and so the Second World War began. Hitler is mainly to blame for the war because he pushed Europe to the brink of war by constantly acting more aggressively and taking over countries despite it being against the treaty of Versailles and other agreements made with the allies. Also Europe was on the brink of war when Hitler invaded Poland and that is what crossed the line and began the Second World War once and for all. In conclusion there can never truly be a single event or person that was truly solely responsible for the Second World War as there are too many links between each instigator. However it is my opinion that despite the fact that all three are very closely related I feel that the main provocative was the treaty of Versailles which, without it being put into place, may have resulted in Hitler never becoming Dictator of Germany which would completely annulled the need for the policy of appeasement; and so would have prevented the war. ?? ?? ?? ?? Lewis fraser ...read more.