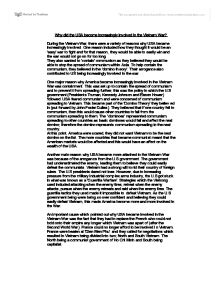 Why did the USA become increasingly involved in the Vietnam War

Another main reason why USA became more attached to the Vietnam War was because of the arrogance from the U.S government. The government had underestimated the enemy, leading them to believe they could easily defeat the communists. Vietnam had a strong will to rid their country of foreign rulers. The U.S presidents dared not lose. However, due to increasing pressure from the military industrial complex arms industry, the U.S got stuck in what was known as a 'Guerrilla Warfare'. Strategies which the Vietcong used included attacking when the enemy tires, retreat when the enemy attacks, pursue when the enemy retreats and raid when the enemy tires. The guerrilla tactics they used made it impossible to defeat Vietnam. As the U.S government being were being so over confident and believing they could easily defeat Vietnam, this made America become more and more involved in the War. ...read more.

USA supported South Vietnam as the North Vietnam received support from Russian and Chinese military supplies. There was also enormous pressure from where the military weapons were supplied as they wanted the war to continue so that they would make more money out of the war because the weapons supply resulted in more money and profit for them. In conclusion, I believe the reason why America became increasingly involved in the Vietnam War was because of the domino theory that John Foster Dulles created and which the government believed in. The main objective of the theory was to prevent the spreading of communism from one country to other countries. Especially as China became a communist country in 1949 causing America to be even more concerned about the Domino Theory. However, during the end of the war, the Domino Theory proved to be unsuccessful rather than victorious. The United States had failed to win over the people's hearts and minds. ?? ?? ?? ?? ...read more.