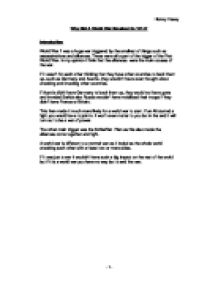 Why Did A World War Breakout In 1914? Introduction World War 1 was a huge war triggered by the smallest of things such as assassinations and alliances. These were all a part of the trigger of the First World War. In my opinion I think that the alliances were the main causes of the war. If it wasn't for each other thinking that they have other countries to back them up, such as Germany and Austria, they wouldn't have even thought about attacking and invading other countries. If Austria didn't have Germany to back them up, they would not have gone and invaded Serbia also Russia wouldn't have mobilised their troops if they didn't have France or Britain. This then made it much more likely for a world war to start. ...read more.

Imperialism which is were you worry that the other empires are getting too big so you take them down, by invading them. You also get in there now in case they manage to get more alliances. Alliances are the main part of the war. They are when you have an Ali but you must help them out when they are in trouble or are just in war. I think this was one of the main reasons as the Schleiffen plan was commenced the alliances backed each other up and eventually started a world war. The Schleiffen plan was also the long term cause as it caused the alliances to start taking place. As Germany wanted to attack France quickly they went through Belgium, but Belgium retaliated. This was because Germany thought that they would be big enough and Belgium wont resist a German attack and also they ...read more.

Without it, it wouldn't have made a war as people would have been too scared. Conclusion Overall I have to a conclusion of the Alliances. If there was no Alliances there would not of been an assassination or even Austria invading Serbia. I think that a long term cause and a trigger factor could be the same as the alliances could have made a long term cause into a trigger. I do think that there is a country to blame and that it is Germany as they thought they could over rule France and Russia without the alliances helping such as Britain. I also think that at 1915 was when it was unavoidable for Britain to escape World War 1. As that was when they started helping the French as an alliance. In the end of this essay I think that the two main causes of the first world war was the Alliances and the Schleiffen plan. ?? ?? ?? ?? History Essay - 1 - ...read more.