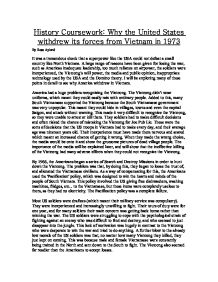 Why the United States withdrew its forces from Vietnamin 1973.

History Coursework: Why the United States withdrew its forces from Vietnam in 1973 By Ross Aylard It was a tremendous shock that a superpower like the USA could not defeat a small country like North Vietnam. A large range of reasons have been given for losing the war, such as Americas inadequate leadership, too much reliance on airpower, the soldiers were inexperienced, the Vietcong's will power, the media and public opinion, inappropriate technology used by the USA and the Domino theory. I will be exploring many of these points in detail to see why America withdrew in Vietnam. America had a huge problem recognizing the Vietcong. The Vietcong didn't wear uniforms, which meant they could easily mix with ordinary people. Added to this, many South Vietnamese supported the Vietcong because the South Vietnamese government was very unpopular. This meant they could hide in villages, towns and even the capital Saigon, and attack without warning. This made it very difficult to recognize the Vietcong, so they were unable to arrest or kill them. They soldiers had to make difficult decisions and often risked the chance of mistaking the Vietcong for Joe Pub Lic. These were the sorts of decisions that the US troops in Vietnam had to make every day, and their average age was nineteen years old. Their inexperience must have made them nervous and scared which meant an increased chance of getting it wrong. ...read more.

America realised this and changed their tactics. This 'saturation' bombing did not work due to anti air weapons used by the Vietcong and only increased enemy morale. This enemy morale was, according to some historians one of the most important reasons why America couldn't win and had to pull out of the war. The North Vietnamese and Vietcong were determined to keep fighting; they were not going to give in. They saw the Americans as invaders who were preventing their county from being united again. If the Vietcong had defeated the French, they saw no reason why they could not force the Americans to withdraw. An example of this is the way they repaired supply lines to towns and villages. Men, women and children helped the war effort in the north by working quickly to repair essential supply routes damaged by the American bombing campaign. In the south, peasants hid supplies or in some cases led American soldiers to Vietcong booby traps. The American tactics during the war were an important part of them losing the war. This included the inappropriate technology they were using. The chemical warfare was an example of this. They tried to alter Vietnam's geography by using napalm to urn leaves and trees, weed killer to kill foliage and so on. What they had not realised is that some chemicals such as Agent Orange contained toxins which made some of the Americans, as well as the Vietnamese develop cancer. ...read more.

The demonstrations got much press and became larger and larger. Some slogans and songs were directed at Lyndon b. Johnson who was showing the increased pressure on him due to these campaigns. Another reason why the protests sparked off was the role of the media. As explained above in the Tet, much of the media coverage focused on how many Americans had died or scandals like the My Lai massacre, which was uncovered almost 2 years after it happened anyway. There was hardly any report on how the Vietnam had huge losses or the Vietcong's failures. They were showing it as 'a peasant nation bravely resisting the might of the Americans'. As you can imagine the public could only see what the media gave them and soon opinion polls dropped in support of the war. In conclusion I think that the main reason for the withdrawal of America from Vietnam is the role of the media and public opinion. As shown in the essay, many of the points mentioned led to the public starting to turn against the war. This in turn put pressure on the President to start peace talks with Vietnam. The media had the largest part in changing the public's opinion though. In cases such as the Tet offensive where what seemed like a victory for America into one for the Vietcong. It was things like this that changed the American public. ...read more.