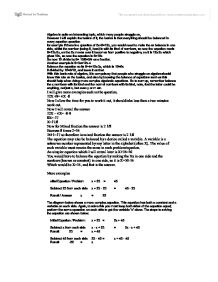 Algebra is quite an interesting topic, which many people struggle on,

However I will explain the basics of it, the basics is that everything should be balanced in every equation question

for example if there is a question of 2x+8=12x, you would need to make the xs balance in one side, whilst the number (being 8, here) is with its kind of numbers, so now the equation reads 8=12x-2x, as the 2x moves over it becomes from positive to negative, so it is 12x-2x which gives 10x, so now the equation is 8=10x

The diagram below shows a more complex equation. This equation has both a constant and a variable on each side. Again, to solve this you must keep both sides of the equation equal; perform the same operation on each side to get the variable "x" alone. The steps to solving the equation are shown below.

Take a look at the equation below. As you

But our end goal is to determine what x is, not what 2x is! Imagine that three investors own an equal share in the company Example.Com. The total worth of Example.com is $300,000. To determine what the share of each investor is, simply divide the total investment by 3:

Thus, each investor has a $100,000 stake in Example.com. We apply the same idea to finding the value of x. However, instead of dividing by the number of investors, we divide by the coefficient of the variable. Since we determined that the coefficient of x is 2, we divide each side of the equation by 2: