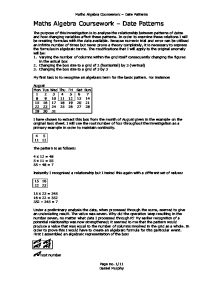 The purpose of this investigation is to analyse the relationship between patterns of dates and how changing variables affect these patterns. In order to examine these relations I will be creating formulas with the data available. Because numeric trial and error can be utilised an infinite number of times but never prove a theory completely, it is necessary to express the formulas in algebraic terms. The modifications that I will apply to the original anomaly will be:

My first task is to recognise an algebraic term for the basic pattern. For instance:

I have chosen to extract this box from the month of August given in the example on the original task sheet. I will use the root number of four throughout the investigation as a primary example in order to maintain continuity.

The pattern is as follows:

Instantly I recognised a relationship but I tested this again with a different set of values:

Under a preliminary analysis the data, when processed through the sums, seemed to give an undeviating result. The value was seven.

Again I am only in the preliminary stages of the investigation yet I already recognise a potential link. The number appears to have doubled from seven to fourteen; could it be that changing the box size to two by three makes the difference become double the column length? If so does a further increase in the height of the box administer a supplementary doubling? I have decided to change the length of the grid before investigating an algebraic equation for the pattern:

It does appear that the column length has doubled, so I have already determined a pattern and link between the previous investigation and this one. I will continue to elaborate upon this occurrence after I have determined algebraic representations of this pattern. To be gin with I will construct an ‘algebra box’ for the seven columned grid:

Judging by this box the equation for the root times its diagonal would be:

Similarly, the equation for the root plus one times its diagonal would be:

As before I can now combine these two formulas and assemble an equation for ascertaining the difference with just the root number and the grid length:

My prediction, it seemed, proved to be correct. I have now established that when using a box with the height of three the difference of the opposing sums becomes double the column length or difference of a box with a height of two. I can express this as:

Before continuing onto changing my final variable I have decided to investigate an additional question which I asked myself earlier; does a further increase in the height of the box administer a supplementary doubling? I inserted another calender grid and tested this theory on it:

Unfortunately the figure did not double as expected, but it did increase again by seven. It now seemed that as the height of the box increased by one the difference increased by the length of the grid. I produced a universal algebraic formula for this four by two box:

In the course of this investigation I have discovered three main things:

∙ When the width and the height of the box increase by one the difference is squared.

∙ When the width or height of the box is individually increased by one the number of columns is added to the difference.

∙ The number of columns is directly proportional to the difference presented by the pattern.

A question that perplexed me throughout the investigation was; why did the number of columns on the grid have a connection with and influence the difference whereas the number of rows was irrelevant? I discovered eventually that this is, obviously, because the length of the grid changes the numeric structure within the box; the number of rows has no effect since it is the height of the box that has a relation to the rows and changes the equation within it.

The investigation I feel was a success, I have recognised and explored relationships and factors that effect the result of the pattern and have proven nearly all my predictions to be correct. I would have liked to have simplified and shortened some of the algebraic equations as they are far too long, however I found that this took too much time and tended to confuse me.