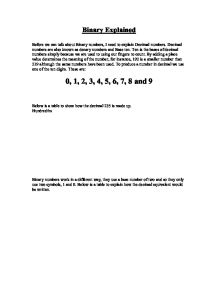 Before we can talk about Binary numbers, I need to explain Decimal numbers. Decimal numbers are also known as denary numbers and Base ten. Ten is the bases of decimal numbers simply because we are used to using our fingers to count. By adding a place value determines the meaning of the number, for instance, 192 is a smaller number than 219 although the same numbers have been used. To produce a number in decimal we use one of the ten digits. These are:

Below is a table to show how the decimal 235 is made up.

Binary numbers work in a different way, they use a base number of two and so they only use two symbols, 1 and 0. Below is a table to explain how the decimal equivalent would be written.

This is how binary works.

We see that 32, 8 and 4 have the number one under them so we add these numbers to the total.

By following table 1, we can start converting the binary numbers to produce decimal numbers here are two examples.

The same process is used to produce smaller numbers as well. Zero may be shown as 0 in all the columns.

Now that the groups have four bits to it, we can code binary into hex, by splitting up the binary into groups then working out the symbol. An example is shown below.

Hexadecimal is used more than octal because computers organise their internal memory in 8-bit groupings or bytes and also multiples of bytes. These grouping can be divided into 4-bit nibbles, which can be coded as a short hand of hex.