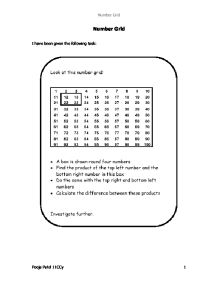 Number Grid I have been given the following task: I will now carry out this investigation in four different parts. The 1st part includes 1 variable; which is the one given to me on the task sheet. I am going to investigate what the difference between the opposite products inside a square shaped box is. I will calculate the differences using the grid for 4 different sized square boxes and then put my results into a table. After doing this for all 4, I will look for a pattern with all my data and try to come up with a general formula which will give me my nth term. After getting my formula, I will predict an nth term using the formula and also calculate the differences using the grid and see whether my formula is correct. For the 2nd part of the investigation, I will be using 2 variables to extend the task further. ...read more.

Rectangles Multiple Grids Size, Shape and Multiple Conclusion In conclusion, I have found many formulas, either to do with the shape of the box inside the grid, the size of the main grid or the multiple of the main grid. While doing this investigation, I noticed a link between all of my formulas and therefore combined all of them together at the end to make one final formula containing 4 variables; the multiple of the grid, the size of the main grid, the length of the box inside the grid and the width of the box inside the grid. I noticed that there is a reason for every number in the formula to be there and investigated why that number was present and what would happen to that number if the circumstances changed. This means that I have done 3 extensions all together; ranging from 1 to 4 variables. ...read more.

Evaluation Overall, I think my investigation went well because I had extended all my tasks and had up to 4 variables. I completed the given task in as much detail as possible and referred my extensions back to the original given task. If I had more time to complete this assignment, I would have changed the shape of the "box" inside the grid and maybe even involve 3D shapes. I could have also investigated the difference of the products from the opposite numbers inside a rectangular main grid; instead of changing the shape and size of the box inside the grid. Additionally, I could have considered that if the numbers inside the grid included negative numbers, then there may be a change to the general formula. On the whole, I had no major problems within the course of my assignment, and felt than everything went smoothly. As I had extended my task to 4 variables, I believe that I had done everything I was asked to in the task and maybe more. ?? ?? ?? ?? Number Grid 1 Pooja Patel 11CCy ...read more.