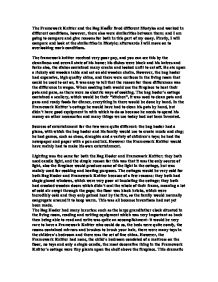 The Framework Knitting Museum: An Accurate Reflection of History or Not?

An Accurate Reflection of History or Not?

The Framework Knitter and the Bag Hosier lived different lifestyles and worked in different conditions, however, there also were similarities between them; and I am going to compare and give reasons for both in this part of my essay. Firstly, I will compare and look at the similarities in lifestyle; afterwards I will move on to overlooking work conditions.

The framework knitter received very poor pay, and you can see this by the cleanliness and overall state of his home; his dishes were black and his knives and forks also, the dishes contained many cracks and looked unfit to eat off. He ate upon a rickety old wooden table and sat on old wooden chairs. However, the bag hosier had expensive, high quality china, and there were surfaces in the living room that could be used to eat on, it was easy to tell that the reason for these differences was the difference in wages. When cooking both would use the fireplace to heat their pots and pans, as there were no electric ways of cooking. The bag hosier’s cottage contained a scullery, which would be their “kitchen”, it was used to clean pots and pans and ready foods for dinner, everything in there would be done by hand. In the Framework Knitter’s cottage he would have had to clean his pots by hand, but didn’t have good equipment in with which to do so because he needs to spend his money on other necessaries and many things we use today had not been invented.

Most of all I believe the Framework Knitter and the Bag Hosier to be undeniably different, yet certain similarities must be taken into account; such as the way they obtain their water, and although it doesn’t have a major effect, and it could be considered as insignificant, the fact that they both used recycled rugs makes you realise that the Bag Hosier wasn’t incredibly wealthy and helps you to understand. However I cannot undermine the contrast between their lives, the most obvious reason for this has to be the wages they receive, as no matter what the circumstances, it all seems to point back to that very thing.

Now I shall introduce the different ways and for what reasons the bag hosier’s cottage has changed since the 19th century. I will go through the living room, in order to give you a basic idea of how many inaccuracies could be found in one room, and finally I shall describe the important changes.

The bag hosier’s cottage has changed since used in the 19th century. Many things may have been lost or damaged over time, or in some cases possibly sold. Many inaccurate additions have been made, despite these I still feel the museum recreated the scene very well, and many were for a good purpose.

Firstly, the living room; a noticeable ornament upon entry is the ornate, tall grandfather clock, it was suggested that this might have actually been too fancy for a Bag Hosier, and/or it would have been far from the similar time, the reason for this addition to the room is that it could have been a donation, also it does have an authentic feel to it, yet it still doesn’t suit the room.

th century. Understanding the limitations the museum has is very important. Overall I think the cottages represent a 19th century cottage quite well, it is mainly donations and customer needs which have taken their toll on making the cottages a definite recreation.

Overall I can’t agree or disagree with the statement; there are many factors that need to be taken into account when debating this topic. Every inaccuracy has to be there for a reason, and all reasons are for benefiting the visitors’ experience, however some choices I could disagree on. It is a very difficult job to undertake; informing the public about the past, and, although it may seem obvious, quite simply because u weren’t there. You have to improvise in many different ways, such as being courteous about donations when given something not needed, finding the right objects to go in the right objects to make the scene fit the outline- a lot of the time you have to settle. A lot of work goes into educating the public, different members of public prefer different learning methods, whether it’s listening, reading or looking around. The Ruddington Framework Knitting Museum has included all of these with the public’s comforts and education first in their list of priorities. It does portray an accurate view of life and work in the Framework Knitting industry in their good parts, however they make small mistakes by doing things that in most cases must be done. Overall I would say I mostly agree with the statement given.

This student written piece of work is one of many that can be found in our GCSE Pay Phone Problem section.