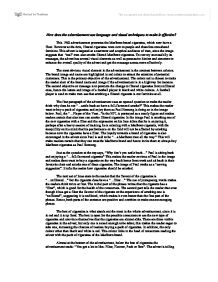 1962 advert for Marlboro cigarettes. How does the advertisement use language and visual techniques to make it effective?

How does the advertisement use language and visual techniques to make it effective? This 1962 advertisement promotes the Marlboro brand cigarettes, which now have a filter. However at the time, filtered cigarettes were new to people and therefore considered feminine. This advert is targeted at a narrower and sceptical audience of men, since the image suggests that "real" men also smoke filtered Marlboro cigarettes. To convey successfully its messages, the advert has several visual elements as well as persuasive diction and structure to enhance the overall quality of the advert and get the message across more effectively. The most obvious visual element in the advertisement is the contrast between colours. The brand image and name are highlighted in red colour to attract the attention of potential customers. This is the primary objective of the advertisement. The colour red is chosen to make the reader alert of the brand name and image if the advertisement is in a highway for instance. The second objective or message is to promote the change to filtered cigarettes from unfiltered ones, hence the letters and image of a football player in black and white colours. ...read more.

Just as the question at the top says, "Why don't you settle back..." Paul is sitting back and enjoying a "...full-flavoured cigarette" This makes the reader envious of Paul in the image and makes them want to buy a cigarette on the way back home from work and sit back in their favourite chair and smoke one of these cigarettes. The image of Paul works as a "serving suggestion". It tells the reader how cigarettes should be smoked. The next set of lines state to the reader that the flavour of the cigarettes is "...unfiltered..." but the cigarette does have a "...filter..." The use of juxtaposing words makes the readers think twice at first. The initial part of the phrase writes that the cigarette has a "filter", which is good for the health of the consumers. The second part tells the reader that even though it has got a filter the flavour of the cigarette or the experience of smoking one is "unfiltered", suggesting it is undiluted, which makes it even better than the first part of the phrase. ...read more.

This line is stating all the good things about these cigarettes and it gives no choice to the consumer but to think that the Marlboro cigarettes are the best in every possible way. In addition, the omission of the health warning is beneficial since readers will not even remember all the consequences of smoking. This idea of health precautions is also removed by the impression of the filter eliminating all bad things from the body and men convinced that also they can smoke filtered cigarettes. Also, at the very bottom it is clear that cigarette companies like Marlboro can support and promote sports, which again links with the idea of cigarettes not having any side effects. In conclusion, the advertisement uses various techniques to contribute to the effectiveness of the message that is sent across to every potential consumer. Every advertisement of the Marlboro brand uses a common technique of language and image to persuade the reader to buy their cigarettes, but this one in particular uses some language and visual techniques that enhance both messages in the advertisement. Rodolfo Martinez. Length: 969 ...read more.