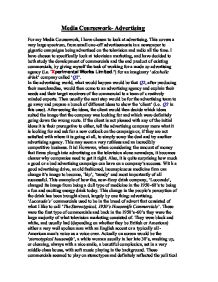 Media Coursework- Advertising For my Media Coursework, I have chosen to look at advertising. This covers a very large spectrum, from small one-off advertisements in a newspaper to gigantic campaigns being advertised on the television and radio all the time. I have chosen to specifically look at television marketing, and have decided to both study the development of commercials and the end product of existing commercials, by giving myself the task of working for a made up advertising agency (i.e. 'Xperimental Works Limited.') for an imaginary 'alcoholic drink' company called 'Q2'. In the advertising world, what would happen would be that Q2, after producing their merchandise, would then come to an advertising agency and explain their needs and their target receivers of the commercial to a team of creatively minded experts. Then usually the next step would be for the advertising team to go away and prepare a bunch of different ideas to show the 'client' (i.e. Q2 in this case). After seeing the ideas, the client would then decide which ideas suited the image that the company was looking for and which were definitely going down the wrong route. ...read more.

. . persons below the age of 18 should never be discarded when considering how to market the product '). Also that they are looking for a trendy image to portray the 'soave, coolness' of the drink. One of the biggest requirements, being that the commercials mustn't be too controversial and instead be easier to understand and perhaps contain an element of humour. The last part of the briefing was that they have a large budget and that this new drink is a very important step for them and so, they are willing to spend a lot of money on making it a memorable campaign. Taking all of this in, my advertising team, would now go away and think of lots of different ideas, surrounding the heading of 'A famous, well known, character' (not a famous person, for e.g. an actor or a model, but an actual character from a film, television programme, comic book or video game, etc). Here is a bunch of characters who I think could be the face of Q2's new Alco pop drink; Spider-Man (from, the comic book, cartoon series and recently released film), Superman (although I feel that over the years he has been too well known and worn out to front a ...read more.

We finish with a close up of Triple X star Vin Diesel saying: "The things I do for my country". This is a well known line from the movie having a catch phrase like this associated with our product is very good for sticking something in a consumers mind. This (as well as the rest of the commercial) is very good publicity for the production company as well. To have their film being advertised over and over is very good news and this incentive is good when getting the rights to make the advert. The commercial suggests that our product (i.e. Q2's new refreshing Alco pop, 'x*x') is the sort of thing that a secret agent would drink. This is particularly appealing to film buffs who have seen the movie, fans of Vin Diesel and people who like a certain type of humour. The reason why we will have an Englishman, sarcastically dumbing down the way in which a secret agent goes about his day is because it is f8unny and it relates to the avereg person in the western world who has an office job. I believe this commercial will be a huge success and that Q2 will be pleased with the campaign. ...read more.