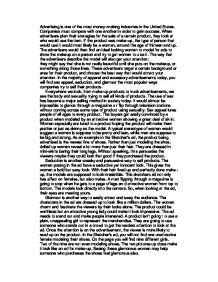 Advertising is one of the most money-making industries in the United States.

Advertising is one of the most money-making industries in the United States. Companies must compete with one another in order to gain success. When advertisers plan their strategies for the sale of a certain product, they look at who would use the item. If the product was make-up, the type of person that would use it would most likely be a woman, around the age of thirteen and up. The advertisers would then find an ideal looking woman to model for ads to show the makeup on a person and try to get women to use it. The way that the advertisers describe the model will also get your attention; they might say that she is not really beautiful until she puts on the makeup, or something along those lines. These advertisers target a certain background or area for their product, and choose the best way that would attract your attention. In the majority of apparel and accessory advertisements today, you will find s*x appeal, seduction, and glamour the most popular ways companies try to sell their products. Everywhere we look, from make-up products to truck advertisements, we see the body and sexuality trying to sell all kinds of products. The use of s*x has become a major selling method in society today. It would almost be impossible to glance through a magazine or flip through television stations without coming across some type of product using sexuality. s*x appeal lures people of all ages to every product. The buyers get easily convinced by a product when modeled by an attractive woman showing a great deal of skin. Women especially are lured to a product hoping the product will make them prettier or just as skinny as the model. A typical stereotype of women would suggest a women is suppose to be pretty and lean, while men are suppose to be big and strong. ...read more.

You can tell a lot about our culture from looking at fashion magazines and the ads they contain. So why do we continue to buy these magazines? Because most people are not satisfied with their looks and we probably never will be. One particular advertisement in Cosmopolitan has to deal with a Ralph Lauren perfume ad. This ad shows a young, white woman who appears very confident. She is looking directly into the camera with the attitude that she is in total control of everything. She has a young, white man, whose face we cannot see, kissing her forehead. The young woman in the ad seems as if she doesn't even notice the man kissing her. She appears as though being kissed is so routine to her that it isn't even that big of a deal anymore. She knows she will always have a man there to kiss her, and this is partly because her use of Ralph Lauren's new perfume. The ad gives the impression the young woman would have no man kissing her if it wasn't for her new perfume. The ad illustrates women need a man to be satisfied. It shows not only does she need the perfume to feel confident, but also the man kissing her. The ad is obviously directed towards younger females. This ad says by wearing Ralph Lauren's new perfume, men will become attracted to you, and you will be more confident. There is another perfume ad in Cosmopolitan in which almost the exact same message is relayed to the reader. The ad is for the new perfume "Lucky You". The depicts a cute guy sitting at a table, having a milkshake. He is obviously distracted by a young woman with blue eyes and long blonde hair. The man is not distracted by her looks, but her cleavage. She is wearing a shirt, tied up just below her b*****s and revealing quite a fair share of cleavage, which is right in the guy's face. ...read more.

Often people watch television commercials and see products being endorsed by celebrities such as Shaquile O'neal endorsing Taco Bell. The viewers are lead to believe that the famous support these products and that by buying them will make them a popular person too. Often the celebrities that endorse products only do so for the money and do not stand behind them with any guarantees or actually using the product themselves. In a basic sense, the celebrities are lying to the people that they are trying to sell the product to. When television viewers see Shaquile O'neal biting into a taco, they are lead to believe that he eats there and likes the food. This advertisement also leads the viewers to think that if a superstar like him eats there that the food must be good and so they decide to go there based on the thought the Shaquile O'neal might think that the food is good even though he never says so. The thought never comes to mind that maybe they should talk to someone that has eaten there and ask them how the food tasted or if they wold recommend going there. In Mr. Mike Royko's case he does not wish to endorse the Mexican restaurant chain because he does not like Mexican food and also does not want to imply to the television audience that he is recommending it to them. He would rather not do the restaurant commercial and not make the money than to do it and give a false impression to the audience of the commercial. People should rely on their own standards to make the choice about a product and not the image of someone else that does not have the same taste or desires that he or she does. When thinking about advertising a product, people should also think about their own moral beliefs and ethics. The product should be something that they would be willing to back and support without having any reservations about it. ...read more.