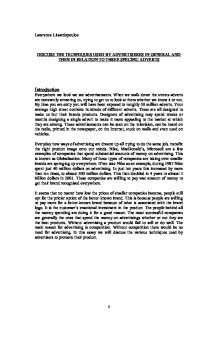 Introduction Everywhere we look we see advertisements. When we walk down the streets adverts are constantly attracting us, trying to get us to look at them whether we know it or not. By time you are sixty you will have been exposed to roughly 50 million adverts. Your average high street contains hundreds of different adverts. These are all designed to make us but their brands products. Designers of advertising may spend weeks or months designing a single advert to make it more appealing to the market at which they are aiming. These advertisements can be seen on the television, can be heard on the radio, printed in the newspaper, on the Internet, stuck on walls and even used on vehicles. Everyday new ways of advertising are dreamt up all trying to do the same job, transfix the right product image onto our minds. Nike, MacDonald's, Microsoft are a few examples of companies that spend substantial amounts of money on advertising. This is known as Globalisation. Many of these types of companies are taking over smaller brands are springing up everywhere. If we take Nike as an example, during 1987 Nike spent just 40 million dollars on advertising. In just ten years this increased by more than ten times, to almost 500 million dollars. This then doubled in 4 years to almost 1 billion dollars in 2001. These companies are willing to pay vast amount of money to get their brand recognised everywhere. ...read more.

This way the advertisers can place what he feels is important in certain areas of the advert. For example the slogan could be placed in the top left, the image directly in the middle and the name of the brand in the bottom right so that you remember the name. Another thing that is placed under the title LAYOUT is television and radio advertising. Here the sound effects are very important more so that the imagery and particularly the radio. In some cases the jingle or song that has been placed in an advert can become more famous by being associated with the advert than for the song itself. An example is that of the advertisement for the football on Sky Sports. This advertisement used a song made by Elton John, "Are you ready for love?" Whilst it was used for the advertisement demand for the song was such that it made it to number one twenty-five years after it was first published. This shows the power of advertising. Now I will analyse three adverts using these three points: Advert Number One Product: Ericsson Mobiles and Tomb Raide Audience: No specific age, phone owners and people who enjoy action movies. Advertised in: FHM Representation: Denotation: the phone is high tech and robust Connotation: by having the phone you can use the same phone as Angelina Jolie and by having this phone you can have as exciting a life as her. TEXT: Top left humour is used to draw the reader in. ...read more.

The thing that sells this for me though is the sample that encourages you to buy the product. I believe this works very well as it encouraged me to buy this particular product. This advert implies that by wearing the aftershave you will be classy and sophisticated. This advert could be aimed at both woman and men. It has appeal for both sides. A woman would buy this for her man to be more appealing and a man would buy it for himself to seem more and classy. A teenager would buy it to appear more mature. CONCLUSION We will never be able to escape advertising. Whilst there are always two different brands trying to be the best there will always be advertising. We could not have television without advertisements, what would we fill the gaps with. Without advertisements what would we put on our walls? There will never be a world without advertising. With companies such as MacDonald's and Nike spending hundreds of millions of dollars it is evidently important. I have discussed just a few of the many, many ways of how to sell a product. New ideas are constantly being dreamt up day after day. As long as there are products to sell people will continue to invent new ways of cleverly promoting their product whether it be on a conscious or sub-conscious level. Adverts will always be in our head one way or another. Lawrence Litsardopoulos DISCUSS THE TECHNIQUES USED BY ADVERTISERES IN GENERAL AND THEN IN RELATION TO THREE SPECIFIC ADVERTS 1 ...read more.