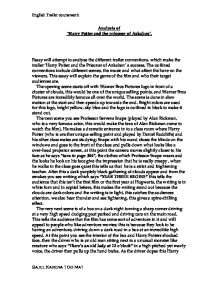 Analysis of 'Harry Potter and the prisoner of Azkaban'.

Analysis of 'Harry Potter and the prisoner of Azkaban'. Essay will attempt to analyse the different trailer conventions, which make the trailer 'Harry Potter and the Prisoner of Azkaban' a success. The outlined conventions include different scenes, the music and what affect the have on the viewers. This essay will explain the genre of the film and who their target audiences are. The opening scene starts off with Warner Bros Pictures logo in front of a cluster of clouds, this would be one of the unique selling points, and Warner Bros Pictures are incredibly famous all over the world. The scene is done in slow motion at the start and then speeds up towards the end. Bright colors are used for this logo, bright yellow, sky blue and the logo is outlined in black to make it stand out. The next scene you see Professor Servens Snape (played by Alan Rickman, who is a very famous actor, this would make the fans of Alan Rickman come to watch the film). He makes a dramatic entrance in to a class room where Harry Potter (who is another unique selling point and played by Daniel Radcliffe) and his other class mates are studying; Snape with his wand closes the blinds on the windows and goes to the front of the class and pulls down what looks like a over-head projector screen, at this point the camera moves slightly closer to his face as he says "turn to page 304", the clothes which Professor Snape wears and the looks he look ...read more.

Ron places the palm of his hand against the window, when it turns to ice and starts to crack; Ron's face looks anxious and afraid. This gives the audience a feeling of anxiety. The next scene is of dark night looking upon a train where Harry, Hermione and Ron are all sitting with a red haired man, Harry says something too him which sounds like 'I soumon mubery out there' and the interior of the train is shown, the red haired man says 'It was a dementa of the guards of Azkaban is searching the trains fro Serious Black' as he says this it goes on to the next scene where a creature of some sort seems to be climbing into a window on a dark and dull night; jus then the scene changes to a fairly large sort of gate closing behind doors, here is a person standing behind the doors, this persons identity is not revealed. The atmosphere at this point is very mysterious and depressing. A voice starts talking which leads to the next scene. The voice says 'It is not the nature of the dementa to be forgiving.' The voice is of the head teacher: Professor Albus Dumbledore (played by Micheal Gambon). What he says is carried on for the next two scenes the first of Harry and Hermione standing in a forest clutching onto each other looking up at something which is not shown to build suspense, Harry and Hermione look scared stiff. ...read more.

The very last scene is of the Harry Potter website 'WWW.HARRYPOTTER.COM'. The writing shown in the clouds are big and bold going across the screen. This is done to show that the film is well known around the world. The overall feel of the film was very convincing; it leaves a big impact on the cinema attendees or the viewers at home. The content would appeal to those who read Harry Potter books, and those who are interested in adventure, mystery and comedy. All the marketing tools combine to achieve a very spectacular trailer. The thunder and lightning affect whenever the clouds are shown blend together with mystery and adventure themes. Seeing the trailer would be more effective then looking at a poster because then you will get to see that there is some sort of comedy in with it as well as mystery and adventure whereas if you saw the poster it would appeal to those who are interested in scary films and to those who read Harry potter books only because a poster can't really talk for itself and tell you that here are comedy scenes in the film too. The trailer would most likely to be scene before films whose target audiences are 10+, and in between the breaks of TV programs which children are most likely to watch for example after 3:30 (after school) onwards until about 7:00. Taken as a whole this trailer is one of the best trailers, it leave a great impact on you, wanting to go and watch the film. English Trailer coursework Sajel Karena 10o Ma1 ...read more.