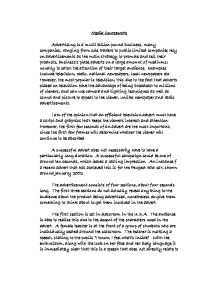 Media Coursework Advertising is a multi billion pound business, many companies, ranging from sole traders to public limited companies rely on advertisements as the main strategy to promote and sell their products, business's place adverts on a large amount of mediums; usually to catch the attention of their target audience. Examples include television, radio, national newspapers, local newspapers etc. However, the most popular is television, this due to the fact that adverts placed on television have the advantage of being broadcast to millions of viewers, and can use camera and lighting techniques as well as sound and picture to appeal to the viewer, unlike newspaper and radio advertisements. I am of the opinion that an efficient television advert must have a script and graphics that keeps the viewers interest and attention. Moreover, the first few seconds of an advert are the most important, since the first few frames will determine whether the viewer will continue to be absorbed. A successful advert does not necessarily have to have a particularly long duration. A successful campaign could be one of around ten seconds, which leaves a lasting impression. An instance f a recent advert that has achieved this is for the Peugeot 306 car, shown around January 2002. ...read more.

However, the producers of the advert still don't reveal the product, or give any clues as to what the product is. I suppose, this could be to build an element of suspense and tension for the audience. Also such a build up would make the final product seem incredibly special. The setting, characters, and context of the third scene are completely different to the first two, but the main principal behind it is exactly the same. The scene is set in a prison in a presumably foreign country, this known due to the different language used. A man is sat in a cell by him and is painting a picture. Nevertheless, the painting is one out of the ordinary. The picture is exceptional and shows the man to be an accomplished artist. Following the same trend as the first two scenes a sentence appears demonstrating the notion of the scene, the sentence reads, "A prisoner is not just a criminal". As with the other scenes the adverts objective is to try and throw out the typical persons stereotype of various people. The first scene was a teacher, the second was a businessman, and this scene is someone who has been put in prison. ...read more.

This is a negative aspect as without all your attention on the advert there is a great possibility that you will not be drawn in to the overall technique that s used to make you want to go out and buy the product that is being advertised. This advert is targeted at anyone who drives, I feel, the content of the advert does not show anything to suggest that the Peugeot 306 is aimed at any particular market segment so I come to a personal conclusion that Peugeot would embrace anyone to procure the vehicle To conclude, my inclusive opinion of this advert is positive. I felt the method used to firstly, catch the attention of the viewer within the first few frames, then build suspense as they wait to discover what the advertised product is, would give rise to a large percentage of the people watching the advert to continue to be absorbed until the end. I also enjoyed watching this advert and believe it is one that has such an effect on you, that you tell other people you know about it. This is a very efficient thing for an advert to have as the car gets more promotion without people even seeing the advert. ...read more.