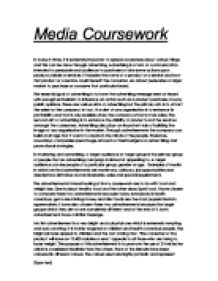 The advertisements I intend looking at in my coursework are to do with food and weight loss. One is about healthy food and the other about junk food.

Media Coursework In today's times, it is extremely important to spread awareness about various things and this can be done through advertising. Advertising is a form of communication intended to persuade and audience to purchase or take some actions upon products, ideals or services. It includes the name of a product or a service and how that product or a service could benefit the consumer. An advert persuades a target market to purchase or consume that particular brand. The essential goal of advertising is to have the advertising message seen or heard with enough enthusiasm to influence an action such as a product purchase or sway public opinions. There are various aims of advertising but the primary aim is to attract the sales for the company. In fact, the aim of any organisation is to enhance its profitability and that is only possible when the company attracts more sales. The second aim of advertising is to enhance the visibility of products and the services amongst the consumers. Advertising also plays an important role of building the image of any organisation in the market. Through advertisements the company can build an image that it wants to create in the minds of the people. Therefore, nowadays, companies spend huge amounts of their budgets on advertising and promotional strategies. In marketing and advertising, a target audience or target group is the primary group of people that an advertising campaign is aimed at appealing to. ...read more.

At the bottom of the page there is a small picture of the St Ivel butter box and there is a promotion line which says that switching to St Ivel Gold from Flora Light will save the consumer 12,400 calories a year. This really persuades the reader to buy the product. It is almost like a slogan and draws the attention of the viewer. In the advert, colloquial language has been used as it is mainly aimed at a younger age group audience who are trying to lose weight. The advert is titled in a bold font, 'BISCUITS' and the page is mainly covered in various pictures. The advertisement makes good use of space and pictures which is very important. The advertisement is completely dominated by pictures and only has a few lines written at the bottom. The advertisement is from a magazine called 'Health and fitness' and hence suits its purpose. The only slogan that has been used is, 'The lowest fat spread.' and it has been underlined to draw the viewer's attention towards it. One of the linguistic devices used is simple English that can be understood by people of all age groups. It also uses a fact that is if people change to St Ivel, then they will definitely lose 12,400 calories a year. This proves that the product has been tried and tested. ...read more.

This confidence suggests that people have been to them and they have been successful. The picture of the burger is very tempting as it looks like one from those famous fast food restaurants. The purpose of the advertisement is to attract people to join their company to lose weight. The tone used in the advert, is very assuring and confident and hence boosts the publicity of the company. This advertisement is sure to have a major effect and those who are trying to lose weight. In conclusion, both these adverts have similarities and differences. However, both of them are exceptionally good adverts with their own pro's and con's. Both adverts promote weight loss. The language devices used in both adverts is very different, where the first one uses colloquial language, the second advert uses imperatives. Both adverts are picture dominated and use a wide range of colours that each has a particular meaning. Both adverts also have slogans that are very reassuring. Both adverts have very little written work on them. In both adverts, all the pictures are related to food, however, whilst one shows healthy food the other shows not so healthy food. Both adverts make use of bold and italics. Also, both adverts are aimed at almost the same group of people. I prefer advertisement two as it is more attractive and more realistic compared to the first advert. The presentational devices used are also slightly better. The slogan is also very encouraging and hence my preference. ?? ?? ?? ?? [Type text] ...read more.