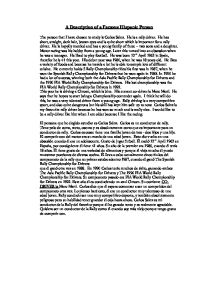 A Description of a Famous Hispanic Person. The person that I have chosen to study is Carlos Sainz.

A Description of a Famous Hispanic Person The person that I have chosen to study is Carlos Sainz. He is a rally driver. He has short, straight, dark hair, brown eyes and is quite short which is important for a rally driver. He is happily married and has a young family of three - two sons and a daughter. Motor racing was his hobby from a young age. Later this turned into an obsession when he was a teenager. He liked to play football. He was born 12th April 1962 in Spain, therefor he is 41 this year. His debut year was 1980, when he was 18 years old. He likes a variety of foods and because he travels a lot he is able to sample lots of different cuisine. ...read more.

He says that he hopes to start being a Championship contender again. I think he will do this, he was a very talented driver from a young age. Rally driving is a very competitive sport, and also quite dangerous but his skill has kept him safe up to now. Carlos Sainz is my favourite rally driver because he has won so much and is really nice. I would like to be a rally driver like him when I am older because I like the racing. El persona que he elegido estudiar es Carlos Sainz. Carlos es un conductor de rally. Tiene pelo de corto, recto, oscuro y es absolutamente corto que es importante para un conductor de rally. ...read more.

This student written piece of work is one of many that can be found in our GCSE Spanish section.