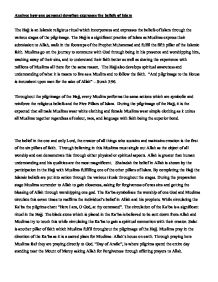 Analyse how one personal devotion expresses the beliefs of Islam The Hajj is an Islamic religious ritual which incorporates and expresses the beliefs of Islam through the various stages of the pilgrimage. The Hajj is a significant practice of Islam as Muslims express their submission to Allah, walk in the footsteps of the Prophet Muhammad and fulfil the fifth pillar of the Islamic faith. Muslims go on the journey to commune with God through being in his presence and worshipping him, washing away of their sins, and to understand their faith better as well as sharing the experience with millions of Muslims all there for the same reason. The Hajj also develops spiritual awareness and understanding of what it is means to live as a Muslim and to follow the faith. "And pilgrimage to the House is incumbent upon men for the sake of Allah" - Surah 3:96. Throughout the pilgrimage of the Hajj, every Muslim performs the same actions which are symbolic and reinforce the religious beliefs and the Five Pillars of Islam. ...read more.

Through praying here Muslims feel they are praying directly to God. "Day of Arafat", is where pilgrims spend the entire day standing near the Mount of Mercy asking Allah for Forgiveness through offering prayers to Allah. Muslims do not worship Angels; however angels constantly praise, obey and worship Allah. Angels help and protect believers and they bring messages from Allah to the people. Angels take the souls of the people during death and question them in their graves; they also blow the trumpet at the Day of judgement. The belief in the angels is seen in Mecca at the Ka'ba as the angels surround the heavenly throne. Also the angel Jibril appeared and showed Hagar the location of water for her son and herself. Through the angel Jibril doing this it saved the life of Hagar and her son and Muslims see this as a reassurance that in the end Allah will provide what is needed. The sacred text of Islam the Qur'an must be completely followed as it was the last book revealed to Muhammad by Allah. ...read more.

Muslims believe there will be a last day, only Allah knows of its exact time but it will come all of a sudden. The belief in the afterlife is seen in the Hajj where Muslims walk and keep the Ka'ba to the left while chanting and acknowledging faith in Allah and the afterlife. The hajj is also considered a positive deed for Muslims for the Day of Judgment. The stage of stoning of the devil shows the rejection of Satan and evil which Ibrahim stoned when tempted. This ritual signifies the throwing away of evil and rejecting sin. Through accomplishing the Hajj it highlights Allah's all encompassing knowledge, the irresistible will and perfect power Allah has. The hajj acts as a universal reminder of the blessing of Allah on humanity of our diversity and the brotherhood to worship the one Allah Inconclusion the fifth pillar of the Islamic faith the pilgrimage of the Hajj expresses the beliefs of Islam and demonstrates how a Muslim should live their life according to their faith. These are expressed through the rituals that are performed which illuminate these Islamic beliefs ...read more.