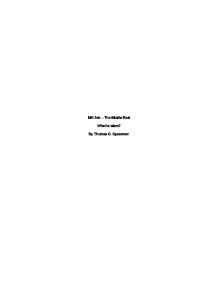 MH 355 - The Middle East What is Islam? By Thomas G. Spearman On September 11, 2001, nineteen Muslim extremists embarked on a terrorist mission by hijacking four passenger jets, and then flying them into the World Trade Center in New York City and into the Pentagon in Washington D.C., killing more than three thousand people. The hijackers were disciples of Osama bin Laden, whose militant brand of Islam was deeply influenced by Sayyid Qutb. The vast majority of Muslims recoiled at this atrocity. They believed it contradicted the most basic tenets of Islam, which teaches that the only just war is one of self-defense. There was an immediate backlash against Muslims in Western countries. It was assumed there was something in the religion of Islam that impelled Muslims to cruelty and violence.1 In the days that followed, President George W. Bush recognized the danger of such misunderstandings and publicly proclaimed that Islam was a great and peaceful religion. At the ceremony of mourning for those lost in the 911 tragedy, held in Washington National Cathedral, a prominent Muslim priest began the proceedings while the rest of the world watched. These and other events began a heightened interest in Islam. People wanted to know more about it. The focus of this paper will center on answering the question of what is Islam. It will examine the central figure, the Prophet Muhammad, and his "revelations," including the Five Pillars of Islam. It will also look at basic Islamic doctrine, its two major sects, and the impact it has had on the political landscape of the Middle East. By no means will it be a definitive study of Islam. That kind of study is for the dedicated scholars of the subject. However, it should be comprehensive enough to give a basic understanding of the Islamic faith, both from a historical and a present point of view. ...read more.

In this way, all are equal before God. Certain rites are performed at Mecca. These rites include circling the Ka'ba seven times, and going seven times between the mountains of Safa and Marwa. The end of Hajj is marked by Eid al-Adha, a feast day commemorating the end of Ramadan.9 Pilgrimage to Mecca is considered a spiritual high point for every Muslim. They come from every part of the globe to share and practice their faith, transcending culture, race, and class distinction. The Five Pillars of Islam are straightforward and simple to follow. Practiced over time, they ingrain themselves into the psyche and thus, transform the soul. This is the strength of Islamic faith and one of its main attractions. The next part of Islamic faith deals with the Hadith and Sunnah. Just as the Quran is fundamental to Islam, so are the Hadith and Sunnah, in that it completes the circle of Islamic doctrine. The Arabic word sunnah, denotes the way the Prophet Muhammad lived his life. The Arabic word hadith is very similar to Sunnah, but not identical- it refers to the narration of the Prophet or what he approved. The scripture of the Hadith and Sunnah are second in importance to the Quran. Here is a more precise definition: According to Muhaddithiin [scholars of hadith -ed.] it stands for what was transmitted on the authority of the Prophet, his deeds, sayings, tacit approval, or description of his sifaat (features) meaning his physical appearance. In Islam, the Arabic word sunnah has come to denote the way Prophet Muhammad (saas), the Messenger of Allah, lived his life. A hadith is a narration about the life of the Prophet or what he approved - as opposed to his life itself, which is the Sunnah as already mentioned.10 The Hadith is composed of two parts: the matn, or text, and the isnad, chain of reporters. The Sunnah gives specific guidance on correct behaviors for Muslims. As mentioned before, scholars are the custodians of Islamic religion. ...read more.

Understanding Islam is not difficult, as this discussion as shown. The Five Pillars of Islam describe the manner in which Muslims express their faith through confession, prayer, giving alms, fasting, and pilgrimage. The Hadith and Sunnah describe the life of Muhammad, who served as an example of leading a pure life, giving guidance on how one should best conduct themselves. The Hadith must go through consensus before it becomes part of the Sunnah, and differences are usually solved through Inference. When major differences occur and cannot be agreed upon, sects and factions form, with the two largest being the Sunnis and Shi'ites. Like any religion, political influences come into play. Issues such as toleration and mass ethos, or fundamentalist against modernist, have had a major impact on world events. However, the belief that Islam helps one establish a direct link to God is an enduring one. Islam's common roots with Christianity and Judaism make it a tolerant religion that is respectful of others. If one understands Islam, it is not difficult to return the same respect. End Notes 1 Dr. Richard T. Nolan, "Introduction to Islam," www.episcopalchurch.org/ecw/a_concise_introduction, internet accessed on March 25, 2003. 2Ibid. 3 Max Gross, The Middle East, Ninth Edition Congressional Quarterly, Washington D.C., CQ Press, pp. 198-200. 4 The Institute of Islamic Information and Education, "Prophethood in Islam," www.usc.edu/dept/MSA/fundamentals/prophet/prophethoodinislasm.html, accessed March 24, 2003. 5 A Brief Illustrated Guide to Understanding Islam, "The Five Pillars of Islam," www.islam_guide.com, internet accessed March 25, 2003. 6 Ibid. 7 Ibid. 8 Ibid. 9 Ibid. 10 Islamic Server of MSA-USC, "Sunnah and Hadith," http://www.usc.edu/dept/MSA/fundamentals/hadithsunnah, accessed on April 10, 2003. 11 Ibid. 12 Dr. Richard T. Nolan, "Introduction to Islam," www.episcopalchurch.org/ecw/a)concise_introduction, internet accessed on March 25, 2003. 13 Dr. Taha Jabir al'Alwani, "The Ethics of Disagreement in Islam," http://www.usc.edu/dept/MSA/humanrelations/alalwani_disagreement/chapter5.html; internet accessed on March 25, 2003. 14 Dr. Richard T. Nolan, "Introduction to Islam," www.episcopalchurch.org/ecw/a)concise_introduction, internet accessed on March 25, 2003 15 The Christian Science Monitor, "Islam's Beginnings and Its Major Sects," http://www.csmonitor.com/index.html; internet accessed on 13 April 2003. 16 Resource Intelligence Program, "Taleban (the Seekers)," www.fas.org/irp/world/para/taleban.htm, internet accessed on April 13, 2003. ...read more.