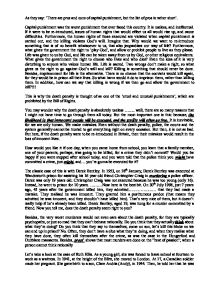 Capital punishment was the worst punishment that ever faced this country

As they say: 'There are pros and cons of capital punishment, but the list of pros is rather short'. Capital punishment was the worst punishment that ever faced this country. It is useless, and ineffectual. If it were to be re-introduced, issues of human rights that would effect us all would rise up, and cause difficulties. Furthermore, the human rights of those executed are violated when capital punishment is carried out, and the killing violates God's will. Imagine that. Why would we want to re-introduce something that is of no benefit whatsoever to us, that also jeopardises our way of life? Furthermore, what gives the government the right to 'play God', and allow or prohibit people to live as they please. Life was given to us by God, and life can be taken away from us by God, or other religious equivalents. What gives the government the right to choose who lives and who dies? Even the idea of it is very disturbing to anyone who values human life. Life is sacred. Two wrongs don't make a right, so what gives us the right to go against God's will and kill? ...read more.

He was a heavy drinker. Within weeks he moved into her flat above the club, despite being engaged to another girl at the time. She eventually accepted Blakeley's proposal of marriage, although Ruth was still married to George Ellis. Blakeley became more and more jealous of her attention to male customers. He spent more and more time in the club to keep his eye on her, embarassing her. Her earnings fell as a result, and his inheritance was blown on a playboy lifestyle and development of a racing car. Rows about money, fuelled by alcohol, became violent - from both sides. He also maintained another mistress, and each was extremely jealous of the other's affairs and activities. So, let's look at her life. Throughout her life, Ruth Ellis had been abused, beaten, taken advantage of, and forced into doing things against her will. She was abandoned with children, left to fend for herself, without anyone to help her. When she had thought she had found a man at last who would care for her, he would beat her, and drunkenly be violent. He took advantage of her, marrying her when he was already engaged, and had different affairs with other women. ...read more.

In the USA nearly 90% of the people executed were convicted of killing white people. However, more than 50% of the murder victims were non-white. Furthermore, the effect on our society that these executions have is tremendous. It would turn us once more into bloodthirsty savages. Throughout the ages, we have been savage. In the Roman Times, we would go and watch people be slaughtered mercilessly by animals and soldiers. Later, he would finish our Sunday tea and go to Whitehall and people's heads being chopped off, or their bodies hung, stretched out and then cut into four, lovely pieces. Introduced the death penalty again would turn us once more into savages, and what's the point of that. Have we not evolved? We didn't have the space rocket in Roman Times. Henry VIII did not have a personal computer. So if we have evolved, if we are now more clever, why do we want to revert back to the foolish traditions of old, that would not have any benefit on us. Obviously, my ... misled ... colleague has not evolved in intelligence, or indeed maturity. Such an argument should prove very interesting, though completely irrelevant and, what shall I say, mistaken. Just remember that, to those who even slightly value human life, it is unfair, wrong, and disturbing that anyone could even attempt to justify it. ...read more.