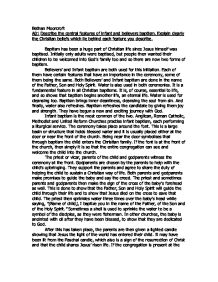 Bethan Moorcroft A01 Describe the central features of infant and believers baptism. Explain clearly the Christian beliefs which lie behind each feature you describe. Baptism has been a huge part of Christian life since Jesus himself was baptised. Initially only adults were baptised, but people then wanted their children to be welcomed into God's family too and so there are now two forms of baptism. Believers' and Infant baptism are both used for this initiation. Each of them have certain features that have an importance in the ceremony, some of them being the same. Both Believers' and Infant baptism are done in the name of the Father, Son and Holy Spirit. Water is also used in both ceremonies. It is a fundamental feature in all Christian baptisms. It is, of course, essential to life, and so shows that baptism begins another life, an eternal life. Water is used for cleansing too. Baptism brings inner cleanliness, cleansing the soul from sin. ...read more.

Sometimes a shell is used to sprinkle the water to be a symbol of the disciples, as they were fisherman. In other churches, the baby is anointed with oil after they have been blessed, to show that they are dedicated to God. After this has taken place, the parents are then given a lighted candle showing that Jesus the light of the world has entered their child. It may have been lit from the Paschal candle, which also is a sign of the resurrection of Christ and that the child shares Jesus' risen life. If the congregation is present at the ceremony, the baby is then finally welcomed into the family of God by the words, "We welcome you." The Believers' baptism is for older people who wish to show a greater commitment to God. It is a public act of witness and is the candidate's own choice as to whether or not they should be baptized. The actual ceremony differs from church to church but each one has similar main features to the rest. ...read more.

The candidate can choose to wear white to symbolize forgiveness of sin and also fresh life with Jesus. There is usually more than one candidate being baptized in one ceremony but each one is individually baptized one after another. They may be asked to give a testimony to explain how they came to faith and why they chose to be baptized. They may also include a Bible passage that is significant to them. Infant baptism is the most common of the two. Anglican, Roman Catholic, Methodist and United Reform Churches practise infant baptism, each performing a liturgical service. The ceremony takes place around the font. This is a large basin or structure that holds blessed water and it is usually placed either at the door or near the front of the church. Being near the door symbolises that through baptism the child enters the Christian family. If the font is at the front of the church, then simply it is so that the entire congregation can see and welcome the child into the church. ...read more.