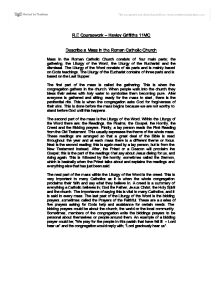 Describe a Mass in the Roman Catholic Church

R.E Coursework - Hayley Griffiths 11MC Describe a Mass in the Roman Catholic Church Mass in the Roman Catholic Church consists of four main parts; the gathering, the Liturgy of the Word, the Liturgy of the Eucharist and the dismissal. The Liturgy of the Word consists of six parts and is mainly based on Gods teachings. The Liturgy of the Eucharist contains of three parts and is based on the Last Supper. The first part of the mass is called the gathering. This is when the congregation gathers in the church. When people walk into the church they bless their selves with holy water to symbolise them becoming pure. After everyone is gathered and sitting ready for the mass to start, there is the penitential rite. This is when the congregation asks God for forgiveness of their sins. This is done before the mass begins because we are not worthy to stand before God until this happens. The second part of the mass is the Liturgy of the Word. Within the Liturgy of the Word there are; the Readings, the Psalms, the Gospel, the Homily, the Creed and the Bidding prayers. Firstly, a lay person reads the First Reading from the Old Testament. This usually expresses the theme of the whole mass. These readings are arranged so that a great deal of the Bible is read throughout the year and at each mass there is a different theme or focus. ...read more.

This is to symbolise how we enter the church in Gods name, and how we are purified and cleansed on entrance. Another example is the Altar, this is because is it situated in the middle and centre of the church and this shows that it is the centre of our attention as this is where the bread and wine get transformed and also where the Priest stands a lot. There are many things in the mass that symbolise something else, for example; the bread and the wine represent the body and blood of Jesus and the real presence of him being there. This is important because teachings say that God is everywhere and with you always, so it is nice to know that God is with us when we are celebrating and worshiping him. Another symbol in the mass is the bell that is rung during the consecration; this symbolises the transformation taking place and is also rung three times to symbolise the trinity. Explain the importance for a Catholic to regularly attend Mass A practicing Catholic should attend Mass frequently and most will go every Sunday; if not more. Catholics go to Mass for many reasons. Most Catholics say that going to mass gives them a sense of family and unity. Being part of a parish is an important part of many Catholics lives because of the sense of brotherhood and the friendships that are built there. The bible tells us the in book of Genesis that we should go to Mass. ...read more.

There is also a lot of evidence in the bible to suggest that Catholics should attend Mass regularly. For example Jesus said "where two of three are gathered in my name so will I be there too". This quote suggests that by gathering together at Mass we are not only following his teachings but inviting him to join us in prayer as well. A good example of how going to mass is essential is although many of the things you can do in Mass are available for you to do at home, you cannot receive communion or a blessing if you are praying at home. Catholics may find it important to be close to God and going to church brings you closer to him, as it is said to be 'consecrated ground'. Other reasons that going to Mass is important is that at church you can speak to the Priest about personal issues or difficulties you may need help or guidance with, you can listen to Gods word and the homily from the Priest and it is also seen as an expected thing for a Catholic to do. In conclusion, I disagree with the statement more than I agree with it. This is because the statement is suggesting that praying in private is more important than at church, and I think that it is just as important and both should be expected of a Catholic. I think that Catholics should keep the Sabbath holy by doing both things, going to Mass and praying at home. This way, you can pray for personal issues at home and still attend Mass regularly. ...read more.