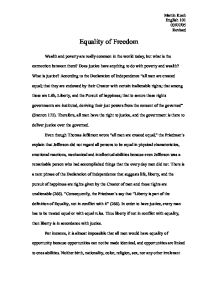 Equality of Freedom Wealth and poverty are really common in the world today, but what is the connection between them? Does justice have anything to do with poverty and wealth? What is justice? According to the Declaration of Independence "all men are created equal; that they are endowed by their Creator with certain inalienable rights; that among these are Life, Liberty, and the Pursuit of happiness; that to secure these rights governments are instituted, deriving their just powers from the consent of the governed" (Stanton 172). Therefore, all men have the right to justice, and the government is there to deliver justice over the governed. Even though Thomas Jefferson wrote "all men are created equal," the Friedman's explain that Jefferson did not regard all persons to be equal in physical characteristics, emotional reactions, mechanical and intellectual abilities because even Jefferson was a remarkable person who had accomplished things that the every day men did not. There is a next phrase of the Declaration of Independence that suggests life, liberty, and the pursuit of happiness are rights given by the Creator of men and these rights are unalienable (266). "Consequently, the Friedman's say that "Liberty is part of the definition of Equality, not in conflict with it" (266). ...read more.

This happens because of some natural catastrophe. An example of this is the Tsunami, and now there are hundreds of peoples who have no food or clothing because of this natural catastrophe. Still, sometimes the rule in a poor society is that the one who does not work would not eat. According to Calvinist precepts, "the only sound way to solve the problem of poverty is to help people help themselves" (255). Galbraith says that there is much that can be done to help treat people rejected by the modern industrial society. Educational deficiencies can be overcome. Mental deficiencies can be treated. Physical handicaps can be remedied (255). There is only one problem; it is not that that government has lack of knowledge of what can be done. This will cause a shortage of money for the government, and they don not want to take the risk. There is no absolute provability that the problem will be solved one-hundred percent, and if it is not then it will grow big again. It seems to be that the government does more for the wealthy people than for the poor, because the government gets better rewards, therefore the government will much rather spend the money in things that will benefit the wealthy people more than the poor. ...read more.

This prevents people from suppressing other people, but does not prevent people from achieving positions of privilege, and prevents these positions from becoming institutionalized (269). If people within a society have the freedom to become what they want by following their own objectives, then everybody will want to have a position of privileged within that society. This will prevent that society from becoming part of a structured and well-established system. The Friedman's in the conclusion on "Created equal" said, "Freedom means diversity but also mobility. Freedom preserves the opportunity for today's disadvantaged to become tomorrow's privileged and, in the process, enable almost everyone form top to bottom, to enjoy a fuller and richer life" (283). "A fuller and richer life" - Is not that the essence of life? As men, we are all created equal, and we have the rights of "Life, Liberty and the Pursuit of Happiness." We have the right to Justice, and with this comes the right to be treated fairly. Whether a person is rich or poor, freedom is going to bring enjoyment of a fuller and richer life to any society. Indeed, justice wealth and poverty are woven together, but without freedom and equality, society is not completed and can not have a full and rich life. Freedom is Justice. ...read more.