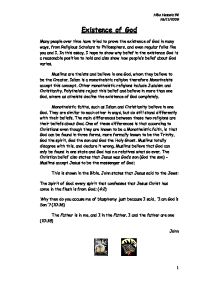 Existence of God Many people over time have tried to prove the existence of God in many ways, from Religious Scholars to Philosophers, and even regular folks like you and I. In this essay, I hope to show why belief in the existence God is a reasonable position to hold and also show how people's belief about God varies. Muslims are theists and believe in one God, whom they believe to be the Creator. Islam is a monotheistic religion therefore Monotheists accept this concept. Other monotheistic religions include Judaism and Christianity. Polytheists reject this belief and believe in more than one God, where as atheists decline the existence of God completely. Monotheistic faiths, such as Islam and Christianity believe in one God. They are similar to each other in ways, but do still stand differently with their beliefs. The main differences between these two religions are their beliefs about God. ...read more.

They sometimes draw pictures or make statues of their vision of God to make themselves feel closer to him/her. Hinduism's Supreme God Shiva In the modern world this is known as idolatry. This differs from Islam, because in Islam you can't bring an image to God, because He is transcendent and far beyond human thought. Muslims also consider idolatry to be a form of blasphemy or the Arabic word 'shirk'. To Muslims shirk is an unforgivable sin as stated in the Quran: Verily, Allah forgives not that partners should be set up with him in worship, but He forgives except that (anything else) to which He pleases, and whoever sets up partners with Allah in worship, he has indeed invented a tremendous sin. (4:48) Surah An-Nisa There are many people in the world that don't believe in god, they are known to be atheists. Different people don't believe in God for different reasons. ...read more.

God is all-powerful and the creator of everything in the universe. He has always been, and He always will be. He is everlasting. We cannot see God, but we can see His creation and His magnificence. Our hearts tell us he is there because He loves us. We can feel Him if we truly try to do so. God is everywhere in His knowledge, as mentioned in the Quran: To Allah belong the east and the West: Whithersoever ye turn; there is the presence of Allah. For Allah is all-Pervading, all-Knowing." (2:115) Surah Baqarah The existence of God is a very big subject indeed and this essay only covers a small portion of the topic. There is a lot about it that we do not know and of the things we do know people continue to debate. I think God exists, there's enough evidence in this world to show this. And as I've said before 'belief in the existence God' is a very reasonable position to hold. God is one. God exists. ...read more.