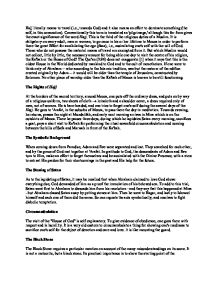 Explain and anylayze Hajj and Makkah

Hajj literally means to travel (i.e., towards God) and it also means an effort to dominate something (the self, in this connection). Conventionally this term is translated as 'pilgrimage,' although this far from gives the exact significance of the word Hajj. This is the third of the religious duties of a Muslim. It is obligatory on every adult, man or woman, to go once in his or her lifetime to Mecca in order to perform there the great Effort for annihilating the ego (fana), i.e., assimilating one's self with the will of God. Those who do not possess the material means of travel are exempted from it. But which Muslim would not collect, little by little, the necessary amount for being able one day to visit the centre of his religion, the Ka'bah or the House of God? The Qur'an (3:96) does not exaggerate [it] when it says that this is the oldest House in the World dedicated by mankind to God and to the cult of monotheism. If one were to think only of Abraham -- who according to the Islamic tradition, was but the restorer of the edifice erected originally by Adam -- it would still be older than the temple of Jerusalem, constructed by Solomon. No other place of worship older than the Ka'bah of Mecca is known to be still functioning. The Rights of Hajj At the borders of the sacred territory, around Mecca, one puts off the ordinary dress, and puts on by way of a religious uniform, two sheets of cloth --a loincloth and a shoulder cover, a dress required only of men, not of women. ...read more.

sacrosanct character of the three fundamental rights of each and every human being concerning his person, his property and his honour; (iv) prohibition of transactions involving interest - big or small; (v) prohibition of vendetta and private justice, obligation of treating the womenfolk well; (vi) constant redistribution and circulation of the private wealth to avoid accumulation in the hands of a few (by means of the Law of obligatory inheritance, restrictions on wills and prohibition of interest, etc.); (vii) emphatic restatement that the Divine Revelation alone should be the source of law for our conduct in all walks of life. The pilgrims are made to hear this same sermon every year, [on the Day of Arafat, 9th Zul-Hijjah, and it is] recited from above this same sacred Hill of Mercy, at 'Arafat. Spiritual and Temporal Aspects There is a reason to believe that a pre-Islamic practice was continued, at least in the early generations of Muslims, during the Hajj festivities: Profiting by the occasion provided by such a vast assembly, an annual literary congress war organized, where poets "published" their new compositions, orators made harangues before the spell-struck masses to demonstrate their talents, professional wrestlers fascinated the spectators, and traders brought merchandises of all sorts. That happened in the near-by 'Ukaz. Caliph 'Umar gave it a most salutary administrative character. For this was an occasion for him to hold the sessions of an appeal court against his governors and commanders as also of public consultation on important projects in view. Let us recall once again, that in Islam the sacred and the profane, the spiritual and the temporal co-exist in harmonious collaboration. ...read more.

The mournful truth is that even with Muslims like us who observe the basic obligation of worship regularly, the case is that we are simply hugging their skeletons from which the spirit has departed. Very few of us can truthfully claim that the generalization we have just indulged in, does not apply to them. Or, at least those sections off the Ummat which still adhere to the fundamental obligations would be finding themselves in an entirely different state today. They would be their own example in the world for moral integrity, for social uprightness and for the excellence of their conduct in the practical and material walks of life. The lives of these men would be the most striking models of piety and goodness. Whoever came to know them would notice in them a peculiar charm and a unique fragrance. This is not a flight of fancy but truth. The few deep-hearted men of genuine faith and endeavour that provide an exception to the general gloom - men whose merit and substance, with those offered up by the Prophet - even today make the finest specimens of humanity and people are struck by an inexplicable magnetism of spirit, and undeniable pervasive quality, as they come into contact with them. The tragedy of our times is that extremely rare as such men have become, the desire to seek them out and to profit by their company has become rarer. Should Allah grant one the good fortune to dedicate oneself to the task of Islamic regeneration, one's chief work would then lie in injecting fresh life and vitality into the foundational duties by bringing the Namaz, Zakat, Roza and Hajj of the Ummat in line with the Namaz, Zakat, Roza and Hajj of the sacred Prophet. ...read more.