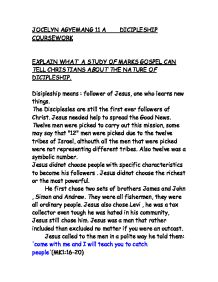 Explain what a study of Marks gospel can tell Christians about the nature of Dicipleship.

JOCELYN AGYEMANG 11 A DICIPLESHIP COURSEWORK EXPLAIN WHAT A STUDY OF MARKS GOSPEL CAN TELL CHRISTIANS ABOUT THE NATURE OF DICIPLESHIP. Disipleship means : follower of Jesus, one who learns new things. The Disciplesles are still the first ever followers of Christ. Jesus needed help to spread the Good News. Twelve men were picked to carry out this mission, some may say that "12" men were picked due to the twelve tribes of Israel, althouth all the men that were picked were not representing different tribes. Also twelve was a symbolic number. Jesus didnot choose people with specific characteristics to become his followers . Jesus didnot choose the richest or the most powerful. ...read more.

The men were to be with Jesus to the point of Crucifixion. Jesus said to his disciples that they were to be 'fishers of men ' , he was trying to imply that the Diciples were to catch men and spresd the Good News. The instructions to the the twelve were strict but they were kept simple "Don't take anything with you on your journey except a stick - no bread, no beggars bag , no money in your pockets , wear sandals but do not carry an extra tunic" (MK6:8-10). These instructions were so that the Disciples would obide by the rules and in having no luxeries, they were not distracted and they could go and carry out their mission. ...read more.

Whoever wants to save his life, will lose it but whoever loses his life for me and for the Gospel will save it.........................(MK8:34-36) The twelve mus not always put themselves before others . They had to follow Jesus until the point of death. They had to take the burden of Religion. The Reward of Dicipleship was Eternal Life Jesus said: "I tell you that anyone who leaves home or brothers or sisters or mother or father or children or feilds for me and for the Gospel will recieve much more in the eternal life" (MK10:29-31) The reward would not be given whilst on Earth , but when the Twelve died and went to Heaven. Discipleship was a difficult task to follow , with alot of obstacles in the way . The determination of the men got them through their mission. JOCELYN AGYEMANG ...read more.