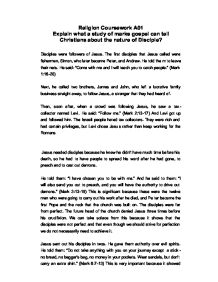 Explain what a study of marks gospel can tell Christians about the nature of Disciple?

Religion Coursework A01 Explain what a study of marks gospel can tell Christians about the nature of Disciple? Disciples were followers of Jesus. The first disciples that Jesus called were fishermen, Simon, who later became Peter, and Andrew. He told them to leave their nets. He said: "Come with me and I will teach you to catch people." (Mark 1:16-20) Next, he called two brothers, James and John, who left a lucrative family business straight away, to follow Jesus, a stranger that they had heard of. Then, soon after, when a crowd was following Jesus, he saw a tax- collector named Levi. He said: "Follow me." (Mark 2:13-17) And Levi got up and followed him. The Israeli people hated tax collectors. They were rich and had certain privileges, but Levi chose Jesus rather than keep working for the Romans Jesus needed disciples because he knew he didn't have much time before his death, so he had to have people to spread his word after he had gone, to preach and to cast out demons. He told them: "I have chosen you to be with me." And he said to them: "I will also send you out to preach, and you will have the authority to drive out demons." ...read more.

Another very good example of this would be when: A rich young man asked Jesus what he must do to receive eternal. Jesus told him to obey the commandments, and he said he did. Jesus told him to sell everything and give the money to the poor, and then come and follow him. The gospel says he went away said because he was very rich. Jesus told the disciples, in what has become a famous quote: "It is much harder for a rich person to enter the kingdom of God than for a camel to go through the eye of a needle." The disciples did not always succeed in doing what Jesus asked. Nearly all of them let him down to some extent - Peter betrayed him, others fell asleep during the agony in the garden, James and John asked him to favour them in heaven, and Judas sold him to the authorities for thirty pieces of silver. They were important because Jesus knew that he was going to die in a short time we believe that it is important to recognise the strengths and weaknesses of the disciples because it can motivate us to be better people. Religion Coursework A02 Explain how this teaching about discipleship might affect the life of a Christian today. ...read more.

Mother Teresa inspired people all over the world. Fewer and fewer young people are taking Mass seriously, but there are still those who remain loyal, especially people who get involved in the church, like Eucharistic ministers, living out the final commandment of Mass, and parents bringing up children in the faith. We can be disciples in our lives simply by helping our friends and peers, helping at home, giving time to the elderly, the homeless, etc, and showing respect for others. By following the greatest commandment, love God and love your neighbour, the reward will be eternal life. Jesus reassured us that we don't have to be perfect, and that we can sin, like the prodigal son, and be forgiven by our heavenly father, if we are sorry for what we have done. In conclusion, I do agree with that statement - modern society does make it difficult to be a true disciple, but with determination, courage, faith, love, humility, trust in God and loyalty, this is possible because in my own experience there are a lot of temptations for young people especially. Turning down drugs for instance is showing true discipleship. That is my personal reason for why I agree with the statement because it is hard but it can be done. ...read more.