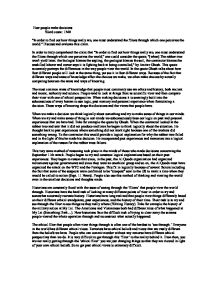 Historians have the hard task of looking at many different points of view in order to try and somewhat accurately recreate history. Historians have long realized that people view things differently based on their different ethical standpoints, past experiences, and the history of their time. Their task is to try and see through the filter to see things as they really where (Writing History). Take for example the history of the military action at My Lai. The Americans and Vietnamese both had different tales of what happened at My Lai (Something Dark...). Now historians face the difficult task of trying to clear away the screens people viewed the whole operation through and reconstruct what actually happened. The ethical filter that people often view things through is often one of the hardest to 'see through.' Everyone in the world has different ethical views. Terrorists have ethical beliefs and views that are vastly different from the beliefs we have. People who can commit murder without any remorse have different ethical perspectives than we do. It is very difficult to get through this 'filter' to the reality behind it. Even then, you are not really getting through the 'ethical filter' you are just changing things so that they are viewed in light of your own ethical beliefs. ...read more.

Cloning according to people using ethics as an area of knowledge is unethical. They say that you would not only be messing around with God's creations but that you would be creating a person just so that you could improve the life of another person. A scientist would look at the situation as one of immense benefit. If people could have clones created with the exact same metabolic structure you could easily perform transplants of organs and tissues and blood etc. This would improve the quality of life for humans from a scientific standpoint but destroy is from an ethical standpoint. As we have seen, when people view the world and events and make decisions and choices and have even simple thoughts about something, they do so through a sort of 'filter' of past experiences and past decisions, their own ethical views, history, and science and try to tie things together logically. Everyone views things with their own biases and their own personal experiences. This is a key concept to grasp in order to find out how things really are. One must understand that reality is hidden behind the 'filters' that people view the world through. It is only once one has attempted to see through the filters that other people judge the world through, that one can understand what actually happened. ...read more.