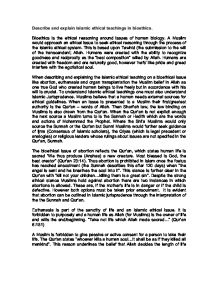 Describe and explain Islamic ethical teachings in bioethics. Bioethics is the ethical reasoning around issues of human biology. A Muslim would approach an ethical issue to seek ethical reasoning through the process of the Islamic ethical system. This is based upon Tawhid (the submission to the will of the transcendent; Allah. Humans were created with the ability to recognize goodness and reciprocity as the "best composition" willed by Allah. Humans are created with freedom and are naturally good, however 'nafs' like pride and greed interfere with the egotistical soul. When describing and explaining the Islamic ethical teaching on a bioethical issue like abortion, euthanasia and organ transplantation the Muslim belief in Allah as one true God who created human beings to live freely but in accordance with his will is crucial. To understand Islamic ethical teachings one must also understand Islamic Jurisprudence. Muslims believe that a human needs external sources for ethical guidelines. When an issue is presented to a Muslim their first/greatest authority is the Qur'an - words of Allah. ...read more.

Despite the strong ethical stance Muslims hold against abortion there are two instances in which abortions is allowed. These are, if the mother's life is in danger or if the child is defective. However both options must be taken prior ensoulment. It is evident that abortion can be outlined in Islamic jurisprudence through the interpretation of the the Sunnah and Qur'an. Euthanasia is part of the sanctity of life and an Islamic ethical issue. It is forbidden to purposely end a human life as Allah (for Muslims) is the owner of life and wills the end/beginning. "Take not life which Allah made sacred..." (Qur'an 6:151) A Muslim is forbidden to give passive or active consent for a person to take their life. The Qur'an states "whoever kills a human soul...it shall be as if they killed all mankind". This reason underlines the belief that Allah decides the length of life and any questioning is distrust in Allah and an act against nature (tughyan). ...read more.

Problems arise here as Shi'a Muslims do not seek anything after the Sunnah to answer the ethical issues and thus do not allow organ transplants donated from the deceased. In the Qur'anic affirmation of Bodily Resurrection (surat-al-Bayyina 98:8) it explains that moral decisions involving cadavers is acceptable and hence organ transplantation reflects Islamic jurisprudence, including the difference in opinion of variants. The ethical system of Islamic Jurisprudence allows an eschatological reward of a better afterlife, with Allah in heaven. This Islamic system is important for adherents and the community. For the individual it is a source of guidance as they turn to core beliefs and teachings in morally contentious times. This gives an outline of what is important and acceptable in society. E.g. Respect, care for others. This provides social cohesion and allows adherents to have a positive structure to live by. To conclude, the bioethical issues of abortion, euthanasia and organ transplantation offer the entire scope into Islamic ethical teachings. These issues allow a deeper understanding of Islamic jurisprudence and the reliance of the Qur'an and Sunnah (by Muslims) in order to answer morally contentious ethical decisions that affect the adherents and the communities. ...read more.