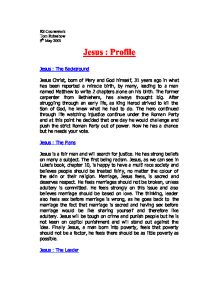 RS Coursework Tom Rubashow 9th May 2001 Jesus : Profile Jesus : The Background Jesus Christ, born of Mary and God himself, 31 years ago in what has been reported a miracle birth, by many, leading to a man named Matthew to write 2 chapters alone on his birth. The former carpenter from Bethlehem, has always thought big. After struggling through an early life, as King Herod strived to kill the Son of God, he knew what he had to do. The hero continued through life watching injustice continue under the Roman Party and at this point he decided that one day he would challenge and push the strict Roman Party out of power. Now he has a chance but he needs your vote. Jesus : The Plans Jesus is a fair man and will search for justice. He has strong beliefs on many a subject. ...read more.

Jesus : The Leader A natural born leader, Jesus leads strongly and is followed by many. Over the last few years, it has not just been his loyal 12 disciples that have followed the great man, but hundreds of thousands people, who feel, rightfully, he is the Son of God. The man follows the Ten Commandments strictly, showing his dignity and respect. The man, who has done nothing morally wrong in his life before is hoping not just to lead by experience but lead by example. Vote him in and see this mans strength in leadership. Jesus : The Messiah Jesus is a kind man, who as I have stated earlier stands up for what he believes him. He has been hailed as the Messiah by many people and has power, authority and respect. An example of this is his ability to heal, of which many publications tell. ...read more.

Now don't get us wrong, people found guilty of any crime, will be punished by not killed, they must learn from their sins in this life and their souls may be recovered. The current government also over taxes you, the voter and you know it. They may try and bribe you just before the election but you know, thanks to us, that these will all be false promises. The other party is the Pharisee Party. These people use their position to their advantage. An example of this is when Jesus got angry in a temple, the reason being the Pharisees were ripping off many a civilian. Jesus, as usual, standing up for what he believed was right, ruined the Pharisees party. He was the man that stopped the Pharisees abusing their power. If you want them to have more chance of abusing that power, vote for them. If you want a respectful, dignified man, who stands up for his beliefs and is totally fair, then vote for the Jesus Party. VOTE JESUS (c)Jesus Party 31 AD ...read more.