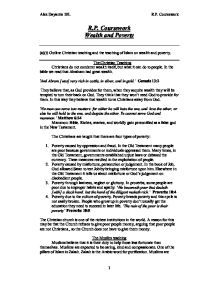 Outline Christian teaching and the teaching of Islam on wealth and poverty.

R.P. Coursework Wealth and Poverty (a)(i) Outline Christian teaching and the teaching of Islam on wealth and poverty. The Christian Teaching Christians do not condemn wealth itself, but what it can do to people. In the bible we read that Abraham had great wealth. 'And Abram [was] very rich in cattle, in silver, and in gold.' Genesis 13:2 They believe that, as God provides for them, when they acquire wealth they will be tempted to turn their back on God. They think that they won't need God to provide for them. In this way they believe that wealth turns Christians away from God. 'No man can serve two masters: for either he will hate the one, and love the other; or else he will hold to the one, and despise the other. Ye cannot serve God and mammon.' Matthew 6:24 Mammon: Bible. Riches, avarice, and worldly gain personified as a false god in the New Testament. The Christians are taught that there are four types of poverty: 1. Poverty caused by oppression and fraud. In the Old Testament many people are poor because governments or individuals oppressed them. Many times, in the Old Testament, governments established unjust laws or debased the currency. These measures resulted in the exploitation of people. 2. Poverty caused by misfortune, persecution or judgement. In the book of Job, God allowed Satan to test Job by bringing misfortune upon him. Elsewhere in the Old Testament it tells us about misfortune or God's judgement on disobedient people. 3. Poverty through laziness, neglect or gluttony. In proverbs, some people are poor due to improper habits and apathy. 'He becometh poor that dealeth [with] a slack hand: but the hand of the diligent maketh rich.' Proverbs 10:4 4. Poverty due to the culture of poverty. Poverty breeds poverty and this cycle is not easily broken. People who grow up in poverty don't usually get the education they need to succeed in later life. ...read more.

Christian aid aims to improve four aspects of people's lives: Food security - ensuring that poor people can meet their food needs. This includes work on issues to do with land, water, trade and the environment. Health - supporting poor people in accessing health care, with particular emphasis on issues around HIV/AIDS. Rights - supporting and undertaking work which enables poor communities to assert their civil, social, political and cultural rights. Peace building and reconciliation - helping communities to overcome situations of conflict. Conflict is a major obstacle to development. Here is an example of a recent Christian Aid funded operation: For 54 years the Bible Army of Uruguay has been helping the poor with their medical needs, eyeglasses, wheelchairs, and other acts of kindness. Their method is always to preach the gospel first, and then do what they can to help. Amazingly, this ministry of compassion makes a practice of never asking for a donation. Christian Aid's Latin America Director, Gabriel Prada, tells his impressions based on a recent visit: 'On my visit to the Bible Army of Uruguay I was able to see with my own eyes how a true "faith" ministry works.' It has been a ministry principle not to advertise their work. Since its beginning they decided to trust the Lord for everything. Similarly, they never sell anything as a way to meet their own needs. They believe that it is God's work and they trust the Lord to provide for the needs of His ministry, to open the necessary doors, and to supernaturally touch the hearts of His people. This is the way they have done it since the very beginning. The ministry does not and will not ask for a donation in exchange for its services. Whenever the poor (believers or not) knock on their door or the Lord brings BAU workers to such, they will first of all preach to them the gospel of salvation in Jesus Christ before any material need is offered. ...read more.

This creates problems for the educated people from developing countries. If they come to a developed country, looking for a job, they need to go through immigration. Also, employers may discriminate against these people, as they will not necessarily have enough money to buy good clothes. First impressions usually stick, no matter how unfair that may seem. If a prospective employee turns up looking scruffy they are not as likely to get a job as a smartly dressed person, no matter how qualified they are. Also, r****m is still quite common these days. Some employers may refuse to employ any workers from developing countries. Of course this may work the other way round, employers may exploit workers from developing countries. Employers may hire refugees etc...because they are cheap labour. The statement 'There should be no rich people as long as there is poverty in the world' is very idealistic. In the real world equality like this would simply not work. I would therefore have to say that I disagree with this statement. Without rich people, how would the poor people get the support they needed? With 'equality' would everyone really be equal, even though some are doing more skilled jobs but getting the same pay? I can see that some rich people do not deserve the money that they earn, like professional footballers that get thousands of pounds just for playing football, whereas doctors do not get as much but do a lot more for the community. If rich people give away their 'excess' money to charity and don't hoard it, then that is fine. Poorer people can get some of the relief that they desperately need whereas if rich people hoard their money and have nothing to spend it on that's just selfish. If the world was full of misers and no one gave to charity, then I would have to agree with the statement. As the world is now though, with some rich people being selfish and others giving I have to, ultimately, disagree with the statement for the reasons above. Alex Dayantis 10L R.P. Coursework 1 ...read more.