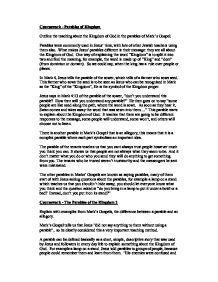 Outline the teaching about the Kingdom of God in the parables of Mark's Gospel.

Coursework - Parables of Kingdom Outline the teaching about the Kingdom of God in the parables of Mark's Gospel. Parables were commonly used in Jesus' time, with lots of other Jewish teachers using them also. What makes Jesus' parables different is their message: they are all about the Kingdom of God. One way of explaining the word "Kingdom" is to split it into two and find the meaning, for example, the word is made up of "King" and "dom" (from dominion or domain). So we could say, when the king has a rule over people or places. In Mark 4, Jesus tells the parable of the sower, which tells of a farmer who sows seed. This farmer who sows the seed is to be seen as Jesus who can be recognised in Mark as the "King" of the "Kingdom", He is the symbol of the Kingdom proper. Jesus says in Mark 4:13 of the parable of the sower, "don't you understand this parable? How then will you understand any parable?" He then goes on to say "some people are like seed along the path, where the word is sown. ...read more.

There are other similarities and differences that you can't notice as much from just looking at parables, really you need to read them first. Coursework - Parables of the Kingdom 3 Explain the use of parables in Marks' Gospel. Traditionally Mark's Gospel was written around 60-70 AD when Nero the Emperor was prosecuting Christians. Mark is thought to have written his Gospel to encourage the early Christians undergoing persecution. It was around this time that they were really suffering. In his Gospel, Mark tells his readers that his book was about the good news about Jesus Christ, the son of God; as shown in his first sentence. In verse 15 he recalls the words of Jesus which tells that good news is that Jesus is near. To help people understand about it he encouraged them to imagine what God's kingdom was like, he did this by using parables to tell them what the Kingdom of God was like, for example, the parable of the mustard seed which says "God's kingdom is small" and it compares it to the powerful forces of the Roman Empire. It also says that the Kingdom will grow and become worldwide. ...read more.

These people might also think that he is brilliant and can do everything, like: making people believe in him, and do as he says to do, he can make them make earth what he wants it to be and he can make them believe in things written in books and the bible for example books saying he will come again. A final thought people may have is that whatever other people say he will come again, and he wont mind what people think, he will also make earth exactly what he wants and how he wants it to be, without criticisms and then earth will be his kingdom and then everyone will believe in him. I don't think this earth will ever be gods kingdom because not enough people believe in god and if they don't believe now they wont believe later and nor will them peoples kids. The world wont be able to change and believe in him just over a couple of years because there isn't and wont be enough people around to stay religious and believe in god enough for the world to be made "great". ?? ?? ?? ?? ...read more.