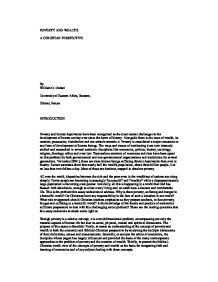 Poverty and Wealth: a Christian Perspective.

POVERTY AND WEALTH: A CHRISTIAN PERSPECTIVE By William O. Ondari University of Eastern Africa, Baraton, Eldoret, Kenya INTRODUCTION Poverty and human deprivation have been recognized as the most central challenges to the development of human society ever since the dawn of history. Alongside them is the issue of wealth, its creation, possession, distribution and our attitude towards it. Poverty is considered a major constraint to any form of development of human beings. The ways and means of eradicating it are now intensely studied and researched in several academic disciplines like economics, politics, history, sociology, religion, theology, ethics and even law. Tremendous amounts of resources and time have been spent on this problem by both governmental and non-governmental organizations and institutions for several generations. Yet today (2001), there are more human beings suffering chronic deprivation than ever in history. Recent estimates show that nearly half the world's population, about three billion people, live on less than two dollars a day. Most of these are destitute, trapped in absolute poverty. All over the world, disparities between the rich and the poor even in the wealthiest of nations are rising sharply. Fewer people are becoming increasingly "successful" and "wealthy" while a disproportionately large population is becoming even poorer. Ironically, all this is happening in a world that God has blessed with abundance, enough to allow every living soul on earth have a descent and comfortable life. This is the problem this essay endeavors to address. Why is there poverty, suffering and hunger in a bountiful world? Do Christians have any responsibility in the face of such a situation in our world? What role or approach should Christian teachers emphasize as they prepare students, to face poverty, hunger and suffering in a bountiful world? Is the knowledge of the theory and practice of economics sufficient preparation to deal with this challenging social problem? These are the leading questions that this essay endeavors to shade some light on. ...read more.

They are therefore preoccupied with the question of efficiency, particularly with the efficiency of the free market stem. The market system answers the three fundamental questions through the market. Ideally, en the right conditions this system should work for the benefit of all; in practice, when the system imposed from a starting point where all nations are unequal, what free trade and market forces do is to magnify those inequalities. It is in this that the 'development gap' between the rich and poor nations finds its genesis. Yates commenting on the Brandt report on international Development Issues that espoused free trade observes the following: The report is trapped in false and outmoded economic concepts. It is well motivated, but the concept that all trade must be mutually beneficial is just not true. Cash crops grown on land while the people starve, is one result of this trade. Trade between unequal partners will be to the disadvantage of the weaker one in nearly all cases.......A market economy is based on greed for money gain; one should not expect good to come from such a base.3 It is John Maynard Keynes the famous British economist as quoted by Yates, who earlier also observed and remarked that "capitalism is the extraordinary belief that the nastiest of men for the nastiest of motives will somehow work for the good of all." White and Killick also make a similar observation that the market system does not have anything in itself that guarantees reductions in poverty thus The characteristic of the market system is that unless there are safeguards, it sets up dynamic forces whereby 11 money makes money" while many others fall into poverty trap. When it operates within an appropriate institutional framework, capitalism is entirely compatible with low and declining poverty rates but there is nothing within the market system itself to produce such an outcome. 4 The unethical basis and motives of human choices clearly comes out here as we examine the practical effects of these policies and theories. ...read more.

In our lives and in our mission as Christian educators, we must show that God has a special love and regard for the poor. Our students in Christian colleges must be trained to realize that their minds and attitudes towards the poor and wealth should be that of God as taught and lived by Jesus Christ Himself. As they train to face society that is in great need, they should be assisted to develop values by appealing to their own ethical awareness through the cause-to-effect critical analysis of the choices they make in life for themselves or on behalf of society. The dimensions of poverty are many. While priorities vary greater weight is given to poor people's crying out against the agony of hunger and sickness, the deprivations of lack of work, the anxiety of insecurity, the injustice of discrimination, the frustration of powerlessness, the denial of opportunities to children. These indeed challenge us to think beyond the narrow disciplinary boundaries and face the problem in its totality. Poverty hinders, affects and interferes with the complete development of human beings that is socially, mentally, physically and spiritually. This therefore calls for an integrated and practical approach in teaching our students to handle the problem of poverty with kingdom values in mind. END NOTES 1. Baulch, Robert, 1996. 'The New poverty Agenda -- A disputed consensus' IDS Bulletin 27(1) pp 1-10 2. This is a summary of the views, experiences and aspirations of more than 60,000 poor men and women from 60 countries undertaken for the World Development Report 2000/2001. 3 Yates Geoffrey, 1980 Food Need and Myooia p. 40 4. White and Killick, African Poverty in the Millenium, p. 60 5. Griffith and Lucas, Ethical Economics p. 172 6. Addison Tony, "A Review of the World Bank's Efforts to Assist Governments in reducing poverty. 7. White, Ellen G. Welfare Ministry, pp. 173-174. 8. Patriarchs and Prophets pp 530-1 ...read more.