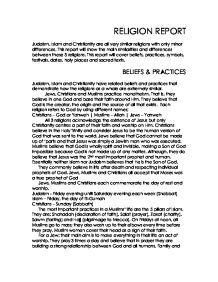 Religions of the Book

RELIGION REPORT Judaism, Islam and Christianity are all very similar religions with only minor differences. This report will show the main similarities and differences between these 3 religions. This report will cover beliefs, practices, symbols, festivals, dates, holy places and sacred texts. BELIEFS & PRACTICES Judaism, Islam and Christianity have related beliefs and practices that demonstrate how the religions as a whole are extremely similar. Jews, Christians and Muslims practice monotheism. That is, they believe in one God and base their faith around Him. They believe that God is the creator, the origin and the source of all that exists. Each religion refers to God by using different names; Christians - God or Yahweh | Muslims - Allah | Jews - Yahweh All 3 religions acknowledge the existence of Jesus but only Christianity centres a part of their faith and worship on Him. Christians believe in the Holy Trinity and consider Jesus to be the human version of God that was sent to the world. Jews believe that God cannot be made up of 'parts and that Jesus was simply a Jewish man who was executed. Muslims believe that God is wholly spirit and invisible, making a Son of God impossible because God is not made up of any matter. ...read more.

SYMBOLS ISLAM Crescent Moon Mistakenly regarded as the symbol of Islam. JUDAISM Star of David Unknown origin CHRISTIANITY Cross/Crucifix Represents Christ's final sacrifice for mankind CHRISTIANITY Triquetra Represents the Holy Trinity and how God cannot be separated FESTIVALS Each religion has their own different festivals and special dates which they commemorate or celebrate. The Islamic celebrate many festivals (Al-Hijra, Ashura, Milad un Nabi, Lailat al Miraj, Lailat al Qadr, Ramadan). Each year the date which these festivals occur changes because of the difference between the lunar calendar (Islam) and the solar calendar (normal) The main 2 festivals are; Eid ul Fitr - A celebration of the end of fasting - Thanking Allah for the help and strength that he gave them throughout the previous month to help them practice self-control. - The end of Ramadan Eid ul Adha - The Festival of Sacrifice - Honours Ibrahim's willingness to sacrifice his son when Allah ordered him to. The Jewish, like the Islamic have many festivals (Days of Repentance/Days of Awe, Shavout, Tis B'av) The main festivals are; Rosh Hashanah (Jewish New Year) - Lasts 2 days - Judgement Day; God decides what the next year will have in store for each individual depending on prior behaviour - God records this judgement in the Book of Life Yom Kippur (Day of Atonment) ...read more.

The Cave of the Patriarchs in Hebron, Palestine is the second holiest in the world as it is where Abraham, Isaax, Jacob, Sarah, Rebekah, Leah, Adam and Eve are believed to be buried. Christians have many important places for many different reasons. The main ones are; Jerusalem, Bethlehem, Rome, Nazareth, Lourdes and Canterbury. ISLAM MECCA Kaaba JUDAISM JERUSALEM Cave of the Patriarchs CHRISTIANITY LOURDES The Basilica of Lourdes Judaism, Islam and Christianity all believe that God provided them with rules to guide them towards righteousness and happiness in their lives. Muslims follow the Qur'an and both Jews and Christians read the bible. Jews also read the Tanakh which is made up of the Torah (first 5 books of the bible), Nevi'im and Ketuvim. The Christians also added the New Testament to the bible which portrays the work and travels of Jesus. Judaism, Islam and Christianity are similar in almost every aspect, they originate from the same general area, they have common beliefs, festivals, places of worship and sacred places and they each have their own set of rules and laws. Islam and Christianity are powerfully influenced by the older religion, Judaism. Judaism, Islam and Christianity derive from the same ideas and concepts; it mostly depends on the individual's interpretation of how God wishes the world to be like. Essentially, these 3 religions are extremely alike with minor differences. ...read more.